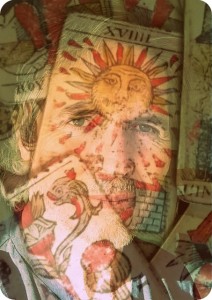 Everything in existence is symbolic of a more enduring reality behind its sensory appearance. The exploration of symbols is a journey into the unconscious. Symbols provide a way of accessing the unconscious. In this article I’ll explain the origin of symbols and how they can be applied to the living life.

At the dawn of self-consciousness, when human nature was still being fashioned through space and time, no symbols existed as we know them today. Participation in life was an inner and outer reality where no rational line could separate the two states; the perception of an object in the sensory world implied the more intangible meaning behind the form. Early cave paintings and, later, stone circles demarcate the crossover period in human evolution when symbols began to externalise as visual counterpoints to the inner realm. Later, under the relentless drive for knowledge, the language of symbols became a necessary function to bridge the gaps in the rational understanding of existence. Symbols, it was found, could be universally applied to subjects such as cosmology, mathematics and esoteric practices.

Over the millennia the use of symbols has been predominant in the occult. The lure of magic and the mystique of the psyche has been an irresistible enticement for priests and psychic magicians. Their manipulation of the psyche and misuse of symbolism over time is responsible for much of the fear and superstition still associated with anything to do with the unknown. Religious symbols are also responsible for much of the distressing psychic energy that torments those emotionally attached to such indoctrination. This is not to dismiss in any way genuine visions or contact with a divine source that may take the appearance of a religious figure or icon.

I’m reminded of a spiritual realisation in 1992, my first that demonstrated there was something more real to life than I’d previously known. The vision appeared within as Jesus Christ but in the graphic style of the Spanish Renaissance painter, El Greco! It wasn’t Jesus and I knew that at the time, but what I didn’t know then was that any energy in its pristine state must be converted to a recognisable symbolic form to make sense of what otherwise would be incomprehensible. A psychic vision, or even a nightmare, can be spiritually productive when the experience is inwardly contained. It’s the same with any paranormal happening such as a visitation by a UFO, which is a symbol of the present manifesting from behind sensory space to challenge (it would appear) the materialism of the scientific consciousness. Energy from any level of purity within the psyche is cleansing and self-healing.

In our modern era the magical element of symbols materialises through the technological wonders of the age. However, there is a difference between manufactured or mind-made symbols and pure symbols. Pure symbols tend to put you in touch with the inner harmony and sweetness of life. Examples of this are found in nature such as a rainbow, a rose or the canopy of stars on a clear night. Sometimes symbols are perceived inwardly as psychic patterns, colours or even fragrances. These types of symbols retain an element of their original purity and can be edifying of the consciousness.

To begin to connect with the true nature of symbols opens up a wealth of possibilities in creative work and the way the external world is perceived. When engaged in tarot readings, for example, I’m aware of the deeper symbolic meaning for spiritual liberation, which is an underlying theme in all of my consultations. To be truly effective in any form of creativity it’s essential to live the symbols to be able to communicate the truth of the matter. Tapping into the creative power of symbols can manifest in different ways. At one point in my professional life the tarot symbols started to externalise and literally come to life. Over a period of time characters and symbols from the cards manifested in person for a consultation. These included a magician, hermit, a priest, a judge and even the personification of death – a man who worked in a morgue!

As symbols and symbolism are commonplace everywhere in the global culture you could ask why the truth of existence is not perceived by a greater number of people. The reason is that symbols have lost their power to establish the presence of the spiritual idea that is everybody’s reality. Today, in our materialistic and scientifically driven culture, symbols are mainly used as applications to establish facts and figures relating to the affairs of the world. Mathematical formulae and computer language symbolise the intellectual orientation of the human race away from the earth towards the sterility of a virtual existence.

The most real object to us that symbolises the present or perpetual continuum of now is the physical body. The body demarcates our unique position in space and time from birth until death. Every part of the physical body corresponds to a universal truth. The heart for example, although a symbol of courage, is also symbolic of an originating beat of cosmic origin. The solar plexus or Sun centre symbolises the radiant point of the body that is the portal to the inner mystery. I find that focusing the attention on this part of the body is a helpful exercise at any time and has a steadying effect on the mind and emotions. When the mind is sufficiently stilled (and it usually requires some kind of meditative practice), surrounding circumstances can usually be seen with a clearer perspective.

And what of love? What is the significance of symbols in love and romance? Love is the medium for union with the mystery of existence. The symbol of love is the female, the personification of beauty. Her body symbolises the sensuous nature and bounty of Mother Earth. Man, as the projective principle, symbolises the cosmic nature of love. He embodies masculine authority that encompasses his love, the female, through the blackness of space. Perhaps the greatest mockery of love is the symbolic love heart that is ever present in birthday cards, tag lines, tweets and goodness knows where else. Although seemingly trivial, its message is psychologically powerful in symbolising the degeneration of love in the world. In reducing the communication of love to such an unconscious form, the power of love is degraded to a meaningless and superficial level.

The symbol of the times is often demonstrated through events and circumstances as they happen. At the time of writing, the latest news headline is the proliferation of space junk now orbiting the earth in ever greater profusion. It has now reached a critical level, causing dire problems for satellites and space stations. If ever there was a symbol of what awaits any new planet or star system populated by human beings, look no further. The space junk is the debris of the mind. Nevertheless, behind the rubbish is the void or stillness of deep space. This cosmic canopy of stars is always there as a symbol of eternity to inspire the individual to transcend the ignorance of the world. The living process, together with the striving for excellence and recognition in all human activities, is symbolic of the one universal movement of reality to make life on earth more conscious.