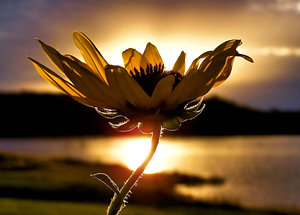 Meditation is a means not an end. Even when consciously practised, the ‘doing’ subtly undermines the natural state of being. To take action with intent (even the search for truth) creates concentric ripples within the psyche which distort the harmony of life. Some people meditate for years without profound inner change. This is because, after a time, a levelling out occurs in the subconscious and the meditation is no longer spiritually productive. The western mind’s approach to spirituality is to formulate a circuitous route that avoids confrontation with the source of its own unhappiness – hence the plethora of therapies and teachings embroiled in time and avoidance of the direct experience of reality.

In the East, meditation was exclusively practised through inner contemplation as a way of life. The devotee could commit himself totally towards attainment with the Atman or Transcendent One. The original East was a culture that recognised the nobility of such an undertaking and the people were united by a cultural ideal built on reverence for the spirit. Provisions for the staple needs of these truth seekers were widely available and the begging bowl was rarely left empty for long. Anyone in the western culture looking to replicate this way of life will be assailed by the forces of an affronted society.

The West is driven by the ethic of acquisition and the exploitation of the earth’s resources. The result is a collision of cultures, from which has arisen the New Age and the many spiritual practices and teachings. Here in the West the eastern approach to meditation doesn’t work so well. It can certainly be helpful in the early stages; but because of the tremendous resistance to the truth in our materialistic culture, eastern methods are unable to penetrate beyond a certain depth. Also, in the absence of any true spiritual values, the western mind is easily seduced by the magical and ceremonial elements of eastern teachings. For someone who practises chanting, visualisation or reciting mantras, the subtlety of the spirit will be imperceptible. However, there’s no doubt there are benefits in the way meditation is practised by many people around the world. Every teaching and therapy has its value for someone somewhere, particularly in these times as deepening anxiety continues to afflict all but the most insensitive.

The physical body is in a realised state of union with nature and the earth. The intelligence within the body is rarely at this same level of consciousness; this can only mean that the meditation method is not effective for the times. The difficulty is that whenever anything with a spiritual connotation enters the public domain, it’s inevitably presented in a watered-down version. Mindfulness, for example, is an eastern practice which has been re-fashioned in our western culture as a palliative for the stresses of modern living. There’s much emphasis on ‘living in the moment’, but I wonder if people are really getting the idea of what this involves. The secret of the moment is its perfection. It’s the closest thing to now, which represents the continuum of eternity. As an individual reduces the past and emotion within their psyche by living as a more conscious being in the present, a power is released to create a greater harmony in the outer life.

People’s perceptions of life vary considerably, which is why everyone has different opinions, interests and beliefs. Within every body is an oscillating point of consciousness deep within the brain; its speed or resonance determines an individual’s perception of the moment. When directly connected to the full potency of this enlightenment point, there’s a tremendous sense of liberation and expansion of awareness. Everybody at one time or another connects with this natural state of being, no matter how fleetingly; and always it is with the same astonishing impact of immediacy and grace. This is original mindfulness beyond time and reason. The difficulty is that the mind, unless prepared, will be unable to rest in the state of neutrality and will begin to think, get agitated or reflect on something from the past. It takes a tremendous commitment as a way of life to detach from the hypnotic pull of the human mind.

The spiritual being behind the body is a beam of radiant energy, a light which is every human being’s cosmic identity. In that other place beyond time and space called eternity, each of us is an idea in the Divine Mind. Existence and the whole struggle of the living process is a means in which the idea of our cosmic reality can be gradually realised more fully in the sensory realm. With sufficient power the idea becomes self-luminous and, in sufficient numbers, creates a fusion effect on a particular segment of the earth’s population. The activation of the idea as a conscious spiritual practice is an aspect of the next phase of human evolution. It is a part of the ever-moving truth, which is really the one universal teaching that encompasses the entire human spectrum of higher knowledge. Cosmic consciousness is participation in the original idea of existence, but at an octave of inconceivable profundity compared to humanity’s current evolutionary status. However, paradoxically, this modern era of heightened tension and uncertainty has produced a reflex action in the psyche which has created an opening to the timeless for the idea to be realised more fully than ever before.

No-one can teach another the truth of existence. It’s a purely subjective state waiting to be discovered in an individual’s living experience. But we’re all mirrors, each reflecting our own light of self-knowledge. My endeavour is to disseminate through our modern technology more of the ‘idea’ as the continuous revelation of my spiritual process. In forthcoming articles I’ll be exploring the nature of light and consciousness as a new aspect of self-knowledge consonant with these times. I trust that what I’ll be able to impart as a means to go beyond meditation will be of value for anyone willing to take a leap into the unknown for the direct experience of reality.