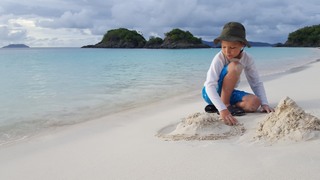 Whenever we’re engaged in activity that’s creatively fulfilling we touch upon an aspect of the Divine. But have you ever wondered why, if there is an omniscient Divine Being, such a creative power is seemingly oblivious to the appalling condition of humanity today? And what’s more, is unable to eliminate the poverty, suffering and the need for belief in the world? The answer is the multiplicity of God’s Being and the remarkable system of creation.

Existence and the higher realms of mind are structured in such a way that God splits into manifold aspects of the indivisible spirit. This is to enable we human beings to evolve towards a deepening perception of the idea of existence as a complete realisation. At the level of terrestrial life the creative aspect of God is untroubled and absorbed in the creative process itself. Just as a child making sandcastles on the beach is oblivious of the vastness of the ocean, so the Creator God has no knowledge of the Ultimate God, the source of all life wherever it appears. Otherwise the creation would grind to a halt.

As the Creator God creates ceaselessly in the futile attempt to encapsulate the idea of its conception, so we replicate this divine impulse in the equally futile attempt to find the truth in the objective world through the ceaseless pursuit of progress. If the answer to the mysteries of the universe could be proved by science, people would immediately start to detach from the need of experience and for the dream of existence to continue. Humanity has made a god of the mind. No mind has ever realised God or ever will – because there’s no love in the mind.

The main impediment to the realisation of God is the plethora of spiritual teachers and religious traditions that confuse the people with silly statements which complicate what’s essentially a simple idea. Religions originate from the minds of followers, as do most of the spiritual practices when the founding master is no longer embodied in the flesh. The difficulty is that the human mind is unable to realise an idea as a unity of pure knowledge. The best it can do is to make a concept which interprets the idea into slithers of knowledge conditioned by cultural and memorable experience from the past. The result is a collision of opinions and attitudes which manifest as conflicts between religious faiths and other discrepancies between spiritual beliefs and philosophies.

The truth is that we are born to create. But as a race we’ve became enamoured with our own creative genius in defiance of the Ultimate God behind the creation itself. This is the creative aspect run amok, which often sullies the perception of life in the frantic scramble to beat the clock and get things finished. But of course nobody ever does, for there’s always something else to do in time. As a consequence, anyone who ventures to realise God as a direct experience must somehow overcome the almost insurmountable urge of creation to propel the human race relentlessly into the projective world of the senses.

In its divine purity God’s creation appears as the glorious earth and the perpetual cycle of the seasons. We adore the beauty of nature and the innocence of the creatures because they mirror our own true nature of sweetness and love. There’s no experience in the purity of the creative act itself since it’s renewed afresh every moment; life just flows as action from one life sequence to the next. We were all children once and engaged in the pure creativity of life. But as we discovered, we were unable to remain in that state of inner freedom for long. Instead, we were compelled to venture out to gain our worldly experience and, as a consequence, gradually lost touch with our original state of being.

Is it possible to realise the Ultimate God beyond the creation – and if so, how? The answer of course is yes, and is discovered in the space between each frame of existence. This is the intelligent pause between the actions of living. When someone’s being creative they are the pure action of life in that moment. When action stops, there’s then the opportunity to unite with the stillness of the Ultimate God within the inner space of the body. Thus does God only reveal God’s inviolable secret to the individual alone.

Nevertheless, the Absolute God remains forever a mystery and extends beyond the horizon of any realisation or sense of completion.