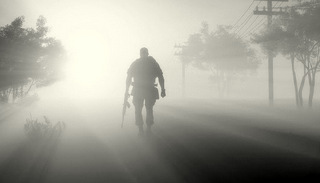 The inscription on the Victoria Cross, the highest award for bravery in the British army, reads ‘For Valour’. It’s bestowed, often posthumously, upon service personnel in the armed forces who were prepared to make the ultimate sacrifice for their country and brothers in arms.

Valour is the spontaneous expression of the human spirit in adversity. This impersonal energy arises to human awareness without thought or concern for self-preservation. It’s quite common for the man or woman, after performing some heroic action, to shun the attention from those eager to congratulate or make them special in some way. This is because although the body took the action, the element of self normally fixated on its own agenda was absent, leaving only the knowledge of a higher purpose beyond the personal pride of the individual.

Valour is displayed by people in so many different ways in everyday life; the single mother trying to make ends meet or the homeless and impoverished somehow surviving against the odds. Often the most poignant acts of valour are witnessed in those who bear great hardship and pain through a longstanding illness or some physical disability. Equally, the actions of those who care for the sick frequently display acts of saintliness in their selfless devotion. Ultimately, to be in existence is an act of valour since each of us is burdened with a portion of the unhappiness and ignorance of humanity’s immemorial past. The valorous is the man or woman who somehow keeps going against the forces of existence while accepting life as it is, and acknowledging the good in the midst of the drama of living.

When medals are awarded it’s said that an individual has been decorated for their actions. The word ‘decorate’ means to beautify and, further back in time, to honour or adorn with grace. Could it be that at the time of death, when all hope has been abandoned, each of us is adorned with grace through the benediction of God the most high? Each life recurrence tests the courage and resolve of the individual, but not necessarily in a way that would be recognised by the world at large.

Just as the Victoria Cross represents the highest award for courage in battle, the supreme accolade of life is bestowed upon he or she who, at the end of the life, returns to the Source having transcended the unconscious living of the past. No greater love hath the one who undertakes to transform their emotional self on behalf of us all – and so ease the burden of those yet to be born. The opportunity to do this is available to all, from the pauper to the billionaire, from the weak to the strong.

In the after-death process the intelligence speeds up, freed from the burden of existence; and in the purified space of consciousness a distant light appears. As the light becomes ever closer, something is registered which appears to be reaching out as an embracement of love. Although what is happening is unbelievable and beyond sense, there’s no fear – only wonder and amazement. Passing through the veil of death, which purges the attachments and coarser energies of a self-conscious existence, the being unites with the timeless essence of this originating light. As the individual light of the life merges with the Father of Lights, the being radiates joy and fulfilment; and in the presence of this eternal glory, receives the accolade of everlasting love. For Valour.