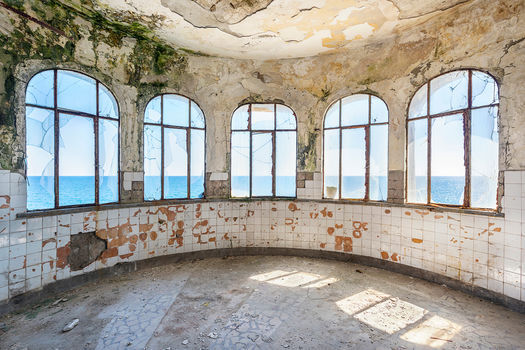 The inner space of mind in its pristine state is transparent and attuned to the spiritual system of intelligence. However, in most people, the effect of continual thought and speculation has formed a structure of mind – a mental enclave that encases natural spontaneity and creative expression. Some degree of mental enclave is necessary to offset the often harsh reactions of people and the challenges of everyday living. In that it’s a sort of protective screen to filter the negativity and forces of existence. The difficulty is that the mental enclave is devoid of love and deadens the sensitivity to the subtle blend of innocence and wellbeing in the body.

The personal element of the mental enclave consists of the struggle to understand the experiences of life through intellectual reasoning. But what begins as a natural formulation of experience as pure mental comprehension soon begins to define the person as a walking block of acquired facts and information. In some people it only takes the slightest provocation to bounce off the walls of the enclave with a torrent of opinions and attitudes. When the mind is continually active, the mental enclave is held rigid by the force of rational thinking. This can be observed in many politicians, intellectuals and scientists whose mentalised space is reinforced by their acquired knowing in order to maintain the worldly positions they occupy.

Whatever the mind is able to conceive as conceptual thought and imagination has the potential, in time, to externalise in the world. On a global level the mental enclave externalises through symbolic layers of resistance in the world psyche, and has done so for thousands of years. Examples include the Great Wall of China, Hadrian’s Wall and, in more recent times, the Berlin wall. These demarcation lines of solidified force will increase in the future as countries and nations become ever more paranoid. The hostilities between the Israelis and the Palestinians have recently seen the construction of a wall between these troubled lands. I suspect that this particular line of force will have far-reaching implications in the future on the balance of power and alliances in the West.

To dissolve the mental enclave involves demolition work of the highest degree. The main impediment is the fear of being psychologically naked without attachment to the certainty of the cause and effect world. The mind is, itself, an effect of a far more enduring source of power – and no effect is able to negate itself back to the original cause. This is self-evident in science’s big bang theory, which ultimately falls short of absolute time due to the movement of the scientist’s mind. The elusive state before the big bang is the stationary realm of consciousness, which is the realm of God or stillness behind existence. This can only be realised through the direct experience of reality when the mind is surrendered to the superior function of the intellect.

The mental enclave shields the self from the radiant light of the unconscious in a way not dissimilar to a lamp shade that diffuses the naked glare of the bulb. Sometimes the walls collapse or are breached through events that penetrate the core of an individual’s psyche. This is common in moments of shock or in close proximity to death. This is being without a centre or position; and the spiritual profundity that everyone alive is endeavouring to reach in their own way.

Becoming more conscious of the impermanence of living, and giving time to acknowledge the invisible power that sustains the life from within, does much to loosen the walls of the enclave. Death, or more specifically the apprehension of the demise of the physical body, attaches people to existence; and it’s that which makes it difficult to go on when it’s time. The mental enclave disintegrates at the moment of death, or in the realisation of immortality, when the light at the end of the tunnel beckons towards a new beginning.