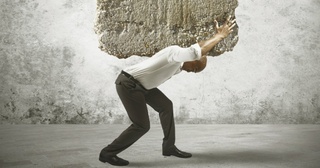 The past is forever encroaching on the present. It‘s energetically substantive and, although assumed to just disappear, its effects condition our perception of life. The strain of holding up the past is like carrying a heavy weight on the back. It squeezes the life out of us and perpetuates the struggle to find some sort of escape from the pressures of daily living. However, unless we fully understand what we’re dealing with, nothing will be more than a temporary palliative. So, what exactly is the past?

There are two aspects to the past: the living past and the dead past. The living past consists of the pure experience of every life form that ever existed on the earth. This is energetically preserved within the collective unconscious of the psyche and is the terrestrial past of our immemorial origins. It’s possible to have insights into this vast memory of terrestrial life, with intimations in the present of the living past. When I need to make reference to a particular period of the earth’s evolution, such as the era of the dinosaurs, I’m able to tune in to that level of the psyche. Similarly, when I write, for example, about the period of ancient Egypt, I can merge energetically with the consciousness of that time. Such is the wonder of this amazing existence.

The dead past is the problem – the emotional residue of human experience that occupies the area of the psyche closest to our surface awareness. This includes the past of anger, betrayal, hatred, fear, persecution and every other negative effect of the human condition. To us this is hell or the dark underworld of our own making. These intense psychic energies are pathologically attached to sensual experience and, being without a body, continually look to enter existence through a suitable living donor. They enter the brain on errant thought signals which light up like fireflies in the dark and attract the attention of the possessive entities. The more intense the thought wave, such as excitement or sexual wanting, the more powerful the reciprocal psychic charge; the effect of this on the person is to magnify their own emotionality. Even the children are vulnerable to psychic possession, which often transfigures their cherubic features into a diabolical effigy of humanity’s past of pain.

The collision of the massed forces of humanity manifests as the conflict and strife besieging the planet daily. These forces of past ignorance influence and determine, for the most part, the decisions and choices of the majority of people in the world. Due to the abnegation of responsibility by the human race, the dead past strives continually to come back to life in the present to afflict its own creation. In everyday life the repetition of experience rolls on; but when an individual is gathering power for self-change they’re compelled to examine events in the light of their own self-knowledge. Everybody resonates at a particular frequency of intelligence which determines their reality as a presence of now. Speed of perception automatically increases as the past is shed.

There is no reality whatsoever in the past. Since virtually everyone in the world continually refers to what happened last moment, yesterday or last year, the majority of the human race is stuck by default in the past. The news broadcasts, through which we generally formulate our world view, focus almost exclusively on the tragedy and scandal of human affairs; this ensures a never ending projection of the misery of existence as a re-run of the past. Has there ever been a news broadcast that began with the headline that life is good now, and is forever present within the body as the love and beauty inherent in us all? That would indeed be good news and a positive statement for life on earth.

It takes great resolve and discipline to negate the past and to function more in the present, since there’s great pressure from the self to perpetuate its own existence in blind ignorance of a higher source of truth. As the self-realisation process intensifies, it’s frequently necessary to confront the past as a conscious action of negation. This can manifest as old friends getting in touch or the opportunity to engage in an experience that was once pleasurable but is now seen to be an energy leakage. There’s a place for friends of course, but mostly they perpetuate the attachment to existence by resurrecting the past memories of emotional living. As the self is transformed by the power of love, new people and influences naturally gravitate into the orbit of the new consciousness of the individual.

Ultimately only love can do the job thoroughly enough to transform the core resistance centred in the most protected area of the brain. Love is the presence of the divine light of God in existence. Contained within the power of love is the restorative quality of the natural state of being, which functions in the present as the timeless essence of the earth’s spirit. There’s no other way for a spiritually motivated individual to make a real contribution to the plight of humanity but to make a stand for life and love. In the end, there’s nothing worthwhile to remember from the past since everything worthwhile is here now in the present. That’s something that shouldn’t be forgotten – but retained as the knowledge of the good that never ends.