The Source of Hatred 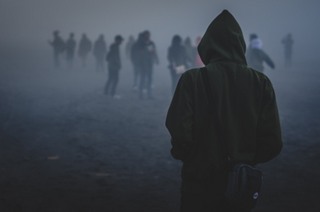 The source of hatred is emotion attached to existence. This is the uncomfortable and cloying feeling that people live with in varying degrees. For most people the source of hatred is a background vibration that is diffused through the distractions of the daily grind in the world. It’s only if a particular button is pressed that the energy rises to the surface and is usually released in an argument or exchange of emotional negativity with another. Everyone is loaded with the potential for violence, given the trigger for hatred to manifest in the world.

Hatred externalises as a desperate cry for love in a loveless world. It’s the frustration in an individual of being separate from the indivisible state of love or being. When connected with the source of love, there’s no desire to hurt another or to inflict cruelty or pain. Real love wants nothing from the world, only to give through the continual surrender of anything that would sully the purity of the moment. Cruel and hurtful people who commit atrocities and acts of violence are racked with pain and frustration in not being able to love and be loved in the world. The only way they feel anything is to make others suffer, and thereby reduce them to the same level of hopelessness as their own.

The condition of the world is a mirror of the hatred of humanity. The acts of cruelty and terror that are multiplying every day across the globe are signs of what’s coming – but on an unimaginable scale. It’s unavoidable because of the terrible hatred already stored energetically within the human psyche. Whatever is within must come out to be accounted for in the light of the world. For someone really wanting to make a contribution to the plight of humanity, the only way is to surrender any hatred to anyone or anything. Just what this entails involves a confrontation with the hateful one within the body. It does not want to relinquish its position and will resist to the bitter end anything that threatens its survival.