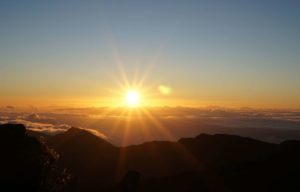 As the word implies, an awakening is the conscious recognition of a previously dormant state of reality. This is the dawning of the light of self-knowledge and the destiny of us all, regardless of how long it takes. However, while the world of feelings and mental association remains the dominant sense, the truth behind the formal appearance of the world will be elusive and the person a prisoner in time.

A spiritual awakening can happen at any time during the life but not necessarily as a blinding light or visitation of a mystical being; more often it’s a gradual dawning of the reality behind the body. Each awakening, although different in everybody, imbues an individual with a purity of vision when truly changed in the light of the spirit. This is because the knowledge and timeless quality originates from the universal source of truth. The man or woman is inducted into a purified state of being which is registered as something beyond the normal living experience.

An indication of an imminent awakening is when the contrasting periods of excitement and depression have begun to level out. The person can feel disconnected from their environment and the people around them as an overall absence of worldly experience. But from an inward perspective life takes on an urgency of creative intensity, accompanied by an anticipation of something profound although unknowable as any memorable reference to the past.

The psyche is our immediate reality and consists of gradations in time. The integrity and justice of the psyche is that whatever someone acknowledges as thought or feeling is returned, reinforced by the psychic energies of the collective experience of humanity. Thus angry people attract more anger, and those more giving of their sweet nature tend to be less troubled and remain largely free of conflict in their lives. The band of the psyche closest to the surface of existence consists of the most intense energies attached to sensual experience in the flesh. These psychic forces include the energy of sex in all its unbridled lust and the inflammatory emotions of hatred, cruelty and cunning which have burdened the human race since the dawning of time.

Beyond the surface level into the deeper psyche, the purified space has fewer forms and reflects the more selfless and divine energies associated with the spiritual realm. It’s from this place of the pure psyche that the awakening process is initiated. Here, the part of self most receptive to the abstract levels of mind faces directly into the source of reality. This shimmering light of consciousness is implicit within each of us as a being of the earth.

The purity of the spirit is modified or downgraded by the matter within a particular body. The power of the spirit is affirmed through the harmonising of the circumstances and relationships which surround the individual man or woman in the challenges of the living life. This cannot be disputed, whereas claims of inner spiritual realisations are unable to be verified in the objective world. The direction the awakening takes is always towards the rectification of ignorance through an upsurge of inspirational knowledge relative to the advancement of the human race.

And yet not everyone can be an enlightened guru or recognised as a genius by the world at large. A mother raising her children or a factory worker in the assembly line is just as important in the grand scheme of things. Whatever role the man or woman performs in the crucible of the living moment serves to awaken a deeper truth, both inwardly and externally to others through their actions in the world.