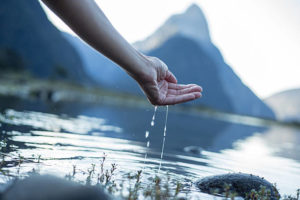 People assume they have to try to be different in order to stand out from the crowd. Although this may seem necessary in some walks of life, it’s not really the case. When relaxed and centred in the palpable sensation of the body, there can be an upsurge of inspirational energy to be expressed in a unique way. The truth is that we are born to create and give back to the earth something beautiful and edifying to the consciousness of the whole.

The most spiritual man or woman is the most ordinary. To be in union with the spiritual consciousness (which everybody is, although at varying degrees of conscious perception) is being ordinary, but in a way that distinguishes such an individual. This is that the normal outer projection of the personal self, which charges the space surrounding the body with the urgency of the progressive drive, is absent. In its place is presence, the purified space which is character: the spiritual identity of the being.

To be ordinary is to abandon the concepts of being spiritual and to just be a body with nothing to defend as any attitude or position of mind. Adopting, for example, an eastern name or wearing flowing robes when raised in the western culture is to make oneself special. It’s the mystical element of eastern teachings (which the western mind interprets through glamour) that impedes the right discrimination needed to offset the forces of the world. Being ordinary involves no psychic embellishment as an aid to self-discovery. This is a most important point to grasp, if you see the truth of it.

Only what is lived is real; otherwise it’s just a concept which becomes a barrier to the truth as direct knowledge. The way of the spirit is practical and follows a logical sequence which introduces a deepening realisation of love and truth. Every experience is a preparation for death; and the pinnacle of life is to face the inevitable demise of the body as an ordinary man or woman. This is to surrender to the moment of truth when all hope is abandoned. Then, in the absence of the world, the reality of existence is perceived in all its impersonal glory.