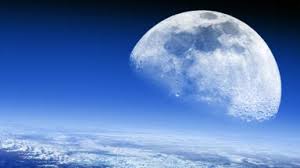 The space between the earth and moon symbolises the subconscious realm and represents everything that can be known and described by the human mind. In relation to the inner journey, the orbit of the moon prescribes a perimeter of mind that is the gateway to the immortal state of life. Beyond the lunar orbit is planetary space and the realm of the unconscious. For an individual consciousness to reach this place of stillness and silence is a climacteric in the spiritual process. On the way, many cherished notions and concepts have to be discarded. The inner descent back through the accumulation of emotional past is made alone, but not in isolation of one’s fellow man or woman. However it’s often the way that those closest to an individual are left behind until such times as they consciously begin their own journey of self-discovery.

The lunar influence on human behaviour is particularly significant for anyone engaged in the quest for self-knowledge. All emotional attachments occur within the space represented between the earth and moon. The further the descent into inner space, the greater the freedom from attachment. The moon’s effects are very powerful, especially in the formative years when first impressions are registered by the developing mind. Encouraged by parents and those in the immediate environment, the intelligence of the child struggles to remain connected to the natural wellbeing within the body and is drawn outwards into the external world of stimuli. With the child’s growing dependence on memory and imagination, a substitute world is created and, in time, complete identification with the emotional self.

At the start of this cosmic journey it’s necessary to gather the speed of ‘lift off’, as my spiritual master Barry Long used to say. This is because the pull of the world has to be exceeded in order to pass through the earth’s atmosphere into outer space. In the early stages there can be a feeling of being ‘spaced out’ until the body system adjusts to the new octave of being. In a similar way, the physical bodies of the astronauts are subject to unusual symptoms due to the absence of gravity within the spacecraft. As the inner process deepens and the distance from the earth increases, there’s a greater sense of freedom and the knowledge of the intrinsic goodness of humanity. However, interspersed with these positive qualities is the unmistakeable presence of something immense looming in the dark.

The presence of the moon is initially disturbing due to the effects of its mass, which creates an energetic field incomprehensible to the rational mind. As a cosmic symbol of the female principle, the moon’s true essence is often twisted by the human psyche into an object of superstition and fear. In astrology the lunar principle, when emphasised in an individual’s horoscope, can indicate a predisposition to remain in a secure environment and maintain a familiar way of life. The impulse to break free and live spontaneously is often hampered by fear of the unknown. The moon that we see in the sensory universe is not real. What we perceive is a formal projection by the brain, which reveals very little about the true nature of the moon. The astronauts who landed on the moon were no closer to perceiving the mystery of the lunar principle than anyone on earth.

The close proximity of the moon creates a drag in time that bends the gravitational waves of the sun, our closest star. This brief interruption of the direct trajectory of light is present in all planets that have a moon or other orbital matter in close rotation. This diffusion of light intensifies the space between the planet and moon that parallels a dual evolutionary process. As life on earth became established, the lunar principle withdrew as an active function and willingly surrendered its vital essence to provide the medium for terrestrial life to externalise. We’re now entering a phase of cosmic evolution whereby the moon is imperceptibly coming to life to support a lunar culture of its own. However to undergo such a major shift in planetary consciousness will necessitate a redistribution of the moon’s vital essence. This will involve a radical change to life on earth and coincide with world-shattering events that will revolutionise life on the planet as never before.

As the moon reflects back the primordial past of our animal heritage and the instinct for security amongst the herd, the sun dares us to break the lunar attachment to reunite with the radiance of the solar being. The sun is the symbol of light, the brilliance of life within everyone on earth. Man, as the projective principle in existence, replicates its ceaseless giving in whatever he serves in the world as the demonstration of his love. Sometimes on the way back there can be a breakthrough when the intelligence merges with the consciousness behind the form. In a profound inner perception I was taken beyond the solar system and behind the appearance of sensory space. In that other place, which can be called the timeless, there’s no separation of objects or distance as space and time. The dimensions of being are immeasurable compared to our partial observation of life, and impossible to describe in conceptual language. This direct experience of reality reveals, beyond all doubt, that the universe is energetically present within every body, as all the great masters throughout the ages have declared.

Beyond the solar system is an octave of life that has transcended the cycle of life and death. Deep within the unconscious of everybody is an idea that represents our authentic spiritual identity. It’s this mighty power that sustains and guides the living life in the outer world. The purpose of life is for this spiritual being to enter existence and to be realised in the world. The pain and pressure of the divine life is the meeting place of spirit and matter as the resistance of the individual is assailed by outer and inner forces. It’s not the spiritual being that causes the pain but the conversion or transformation of the wilfulness of the emotional self to love. As the emotion is wrung out, the residue is energetically recycled in an extraordinary way. Through the light of the spiritual beam, the negative emotion is dispersed beyond the orbit of the moon. In this rarefied space emotion is purified of its negativity and converted back to love. This is an aspect of the after-death process that happens unconsciously after physical death, or while alive as the conscious surrender of unhappiness.

The next phase of human culture will take man beyond the moon, first to Mars and then to the stars. Wherever he goes he will never find another paradise like the earth. Even if the planet were obliterated, the essence of the earth as the core of his spiritual identity would remain as vitally active as always within his being. The truth of life is realised through cancelling membership of the global human mind club and relinquishing the pain of existence. The truth is that man and woman are born to love and are immortal beings of immeasurable profundity. The power and glory symbolised by the universe of stars and planets is the mystery of life’s becoming. Each of us, in the living of our lives, contributes to the never completed picture of the divine masterpiece within the eternal mind.