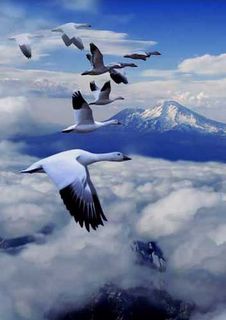 Within every man and woman is a yearning to return home. Having entered a physical body and extended into space and time, we’ve left our original state of love. We do our best to replicate the celestial state and look to the home to provide comfort, warmth and protection from the harsh realities of the world. However, people who remain in the same place throughout their entire living experience rarely change much from an inner perspective due to the attachment to a familiar environment and way of life.

What frequently happens is that life itself intervenes to provide the worldly circumstances to bring people to a point of crisis. Floods, earthquakes, fires, and other apparently random events where everything is lost, can be so traumatic that an individual is compelled to turns inwards to begin the journey home. In the spiritual process it’s often the way of things that the truth seeker is uprooted so as to begin a new phase of life consonant with the higher state of consciousness.

‘Home is where the heart is’ says the old adage. The heart is more than just a physical organ; it’s the aperture to the vital body, which has no formal outline or shape. The perception of consciousness has no boundaries and can appear out of the body, extending even to the furthest star. Within the word home is ‘Om’, the scared sound or echo of eternity. It’s this divine emanation which connects life in its myriad forms to a universal field or matrix. The matrix provides the sense of unity as belonging, in the first instance to humanity and the earth, and in the second instance to the universe and life everlasting. The space within our homes forms a psychic structure within the matrix of the property which matches our spiritual frequency. This is why people often feel relieved to get home, even after a short while. There’s an immediate correspondence between the psychic energy retained within the walls and furnishings which reinforce the sense of belonging in a divisive and alien environment.

The world’s idea of coming home is to amass wealth and be surrounded by material possessions, which reinforce a sense of security to offset the uncertainties of living. The difficulty arises when, ‘having arrived’ in the eyes of the world, it’s time to go on and leave behind all that’s been gained. At death, freed of the burden of living, we gravitate towards a place in accordance with our perception of reality. It’s said that God’s House is a place of many mansions – residences of deepening profundity within the higher realms of mind. We all return to the heaven comparable to our lights or spiritual profundity.

Everyone’s a winner in life since there’s no death, only the fear of the unknown. As children, our perception of immortal life was partially preserved since we were closer to the womb. Were it not for the absorption of the ignorance of the world, we would all continue to be informed and guided from this sublime inner state. The world provides the backdrop and drama in which existence plays out through the infinite life forms, without which the higher states of mind could not function. To begin to come home while still in a flesh and blood body is to have become disenchanted with the world. But it has to be done as a conscious action of detachment from the experience of those things which cause emotional pain and suffering in the life. This is true individuality: to be responsible for my life and the conditions that surround it.

How long must humanity toil in the world before turning inwards to come home? For the majority – an eternity of time. But for the individual man or woman who has begun to awaken from the dream, time is virtually up. Our earthly home, however precious or beautiful, is merely a replica in sense and a temporary place of residence. People often become so burdened by the responsibilities of home ownership and struggling to meet the monthly mortgage repayments that the quality of life is depleted. It’s best to enjoy what’s provided with the knowledge that nothing lasts here for long. Perhaps the most important lesson in life is to be ready to let go of everything when it’s time.

The sensory earth is a paradise; but it’s not what it used to be. The radiance of the earth in its ethereal splendour is within the body and unchangeable as the spiritual principle of terrestrial life. Coming home is to return to this, our most intimate state of original unity. The romance of life is its uncertainty and passion to reunite with love as an unending source of inspiration and deathlessness. In truth there’s no place like home.