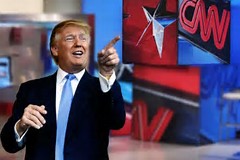 Fake news is a weapon of mass deception which has been operative for millennia as propaganda to discredit rivals or gain public support. The current version of fake news began when certain individuals on social media fed fabricated stories, linked to current events, in such a deft way that they appeared to be genuine. As the posts generated interest and went viral, they were picked up by legitimate news agencies across the world. Ironically the ‘fake news’ is now deemed important enough to run as ‘actual’ news stories, due to the worldwide interest on social media!

Events themselves, no matter how tragic, have no emotional content but are presented in reports to create a sensation of heightened excitement in the global audience. This is prolonged by continual analysis and replay of someone else’s misfortune – until superseded by something even more sensational. The mass media represents the arrow point of human ignorance. Wherever reporters appear in the world, tragedy and scandal follow as a mirror of humanity’s void of unhappiness and despair. The phenomenon of fake news will continue to escalate in proportion to the rise of civil unrest and political instability around the world. The implications of this, particularly in times of national emergencies, are potentially catastrophic in stoking the emotional ambience of the global population. This in turn will fuel the media’s hysteria and put unbearable pressure on leaders to take potentially drastic measures.

At another level, fake news represents an overspill of the incessant deluge of information continuously reported across the globe. It’s the unseen effect of the tide turning in on itself before being engulfed by its own residual force. Fake news is a way of keeping the charade of misleading the people a going concern by blurring the edges between what’s real and reality entertainment. Many movies and television dramas are now portrayed in such a way as to resemble actual news broadcasts, with particular emphasis on graphic violence. This is to subliminally prepare the people for the shocking impact of increasing civil unrest and massive reprisals by the armed forces.

Fake news has become a generic term used by politicians in a tight squeeze to throw doubt on the authenticity of any negative media coverage that shows them in anything less than glowing colours. The dominant force in the world today is the entertainment industry, which is built on glamour. Glamour is sexual force on its best behaviour and is paramount in whatever is presented through the media. President Trump is the indisputable high priest who presides over the most glamorous family and nation on earth. Glamour panders to the voyeuristic aspect of the self, which is presented as something accessible to the common people but is something outside of their own experience. This is the appeal of populism, the latest political doctrine which aims to return power to the people instead of being controlled by an elite group of bureaucrats.

The line between factual news and fabricated events is now so nebulous that nobody can be really sure as to what’s real or what’s fake. Since nothing in existence is at it appears, fake news is actually close to representing the truth behind the appearance of the objective world. This is because the truth can only be perceived through that which is false. Attachment to the world as something that endures as a permanent structure necessitates hope for the future. The psychology of this is to relieve the masses of any responsibility for life on earth now by keeping them bound to the mores of a society ingrained with ever-shifting values.

The human race, except in rare instances, has forgotten the purpose of life – which is to be free of the burden of emotional negativity. Fake news begins with anything that moves matter within the body as emotional feelings and interpretation which distort the facts in any given situation. Imaginative speculation or worry is fake news being screened within the mind and emotional body. This is the unpopular truth, which every news agency on the planet is unconsciously keeping from the people of the earth.