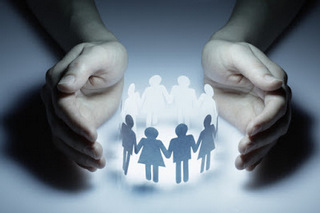 All families are an extension of a line from the original tribe of the human race. This can be traced back historically through the epic poem the Mahabharata, and the epoch of the twelve tribes of Abraham recorded in the Old Testament. But even before then the primitive cultures were united by family values centred on reverence for the elders as custodians of the truth of life. In those earliest of days maturity in age brought wisdom, not just of the practical world but of the purpose behind life and death. The family functioned to honour the patriarch or matriarch, who personified justice and integrity. Just how far humanity has strayed from the roots of our original stock can be gauged by our family values today.

The family is an integral part of everyone’s life, regardless of their experience during the formative years. There’s no denying the deep bonds of love and affection that can develop between family members, but also great animosity which, in extremes, pass from one generation to the next. People often harbour resentment or anger for years, or even a lifetime, when emotional blockages have formed during childhood.

The original meaning of the word ‘family’ applied to not only the family members but to the slaves of the household as well. This is precisely what has happened in so many families who remain in emotional bondage to each other, and thus become oblivious to the broader perspective of life. As a race, we have virtually no family values beyond the normal personal desires and anxious concerns for those we love. So what are family values that we can all embrace and make the world a better place?

The true value of a family, surely, is to bring more love and honesty into the home so that our children can be given every opportunity to function as responsible human beings. Every parent naturally wants what’s best for their children and to give them everything they can to enjoy their lives and prepare them for the world. But this can only be realistically put into practice when both parents are united together in their endeavour to eliminate emotional negativity between them. So often the atmosphere within the family becomes tense, resulting in misunderstandings and bitter arguments. Children, through the absorption of the psychic presence of the parents (and particularly the sexual frustration of the father), grow up to become carbon copies of mum and dad, burdened by the same worries and unhappiness.

Blood, it is said, is thicker than water. Blood is deeply spiritual, symbolic of the stream of life which flows from the source of the eternal spring. Passing through the psychic band into the physical body, the heart regulates the pure psychic plasma – life before it takes form – which would otherwise destroy the vital organs. Through an ingenious system the heart releases bursts of plasma every moment, which externalise as the blood that is pumped continuously throughout the life of the body. Each member of a particular family is an extension of an hereditary lineage that has a certain blood type verified by DNA analysis. But what science has yet to discover is the psychic identity that carries with it the emotional energy of past experience. This strengthens the bond between family members (often unconsciously) and explains the karmic challenges that are so often encountered, as well as other subtle variations of infinite complexity.

Love within the family is mostly the sentimental kind that relies on the cooperation of everyone not to upset the feelings of each other. Dishonesty is the cause of all family disturbances, which build up as emotional pressure that is inevitably released in violent altercations of one kind or another. For example a son or daughter may visit the parents out of an ingrained sense of duty rather than for a genuine need or for the pure enjoyment of being in their presence. By considering mum and dad, or anyone else for that matter, emotion is generated which can imperceptibly sully future interactions, not only with the parents but in personal relationships, particularly in partnerships. And so the charade continues. Honesty is the prerequisite for keeping the lines of communication straight. But it’s not always easy. As Jesus said in a famous saying, ‘I come with a sword to turn son against father and daughter against mother’. Even in those times close ties within the family were a hindrance to anyone determined to be true to a more impersonal love than the personal attachments to the family unit.

Western civilisation is unique in being the first world civilisation. And there’s no going back. The human family of planet earth is now a fragmented, violent and paranoid body of multiple cells frantically searching for something of value to serve with their lives. Few find this elusive ideal, but each individual body participates in the mystery of life. The influence of the family is not just a personal affair, but extends to an impersonal gathering of each constituent part relative to the unity of life. The fact that this is usually imperceptible and goes unrecognised by the world at large is irrelevant. But the miracle and integrity of existence is that when someone is true to life by doing what is known to be right within the depths of their being, everyone on earth gains in some way; if not immediately – in time.