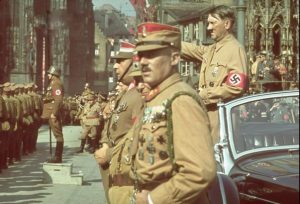 The life of Adolph Hitler has been studied and analysed as much as anyone in recorded history in the endeavour to get to the truth behind this extraordinary man. Yet, despite being subject to such intense scrutiny, he still remains essentially an enigma.

There were three climacteric events in Hitler’s life that activated the potential force that would propel him to spearhead the Nazi party and become the most feared man on earth. The first was the death of his mother in 1908. She was his first love and represented the embodiment of his formless love within. The sense of isolation he felt after she died was compounded soon after through the rejection of his watercolour paintings at the Academy of Fine Arts. Hitler’s art represented his love in the world and this humiliation sealed, for the remainder of his life, the possibility of him ever being open to love again. From here on Hitler was looking for something tangible on which to project his anger, frustration and discontent. The First World War saw him decorated with the Iron Cross and, towards the end of the conflict, blinded with mustard gas. As he slowly recovered, the unexpected news of Germany’s unconditional surrender stoked his mounting inner rage. Following the Treaty of Versailles, Hitler had at last found the scapegoat to enable him to unleash the ferocity of his hatred – the Jews.

After establishing his position as the Fuhrer, Hitler had now discovered the purpose of his life: to become the saviour of the German people. Reinforced by the anti-Semitic fervour of fellow party members and the support of the nation, Hitler the man underwent an inner psycho-spiritual transformation that obliterated much of his personal self. This gave him the resolve to stand alone and contain the awful sense of isolation that arises from being ‘the only one’. He was reborn as the Father of Germany, enabling him to be ruthless and emotionally detached from anything that would deter him from his objective of establishing an Aryan master race – whatever the price.

The Final Solution was doomed to fail. Any ideology, as history demonstrates, contains in the seeds of its conception the means of its eventual downfall. The idea of a Thousand Year Reich was pure fantasy and those closest to the Fuhrer knew it. Hitler embodied aspects of the Divine as well as the devil. What is Divine never enters existence, but is always present behind the appearance of form.  The devil, as force in matter, must come forward to be recognised in the mirror of the world. In Hitler’s body the devil was most prevalent and compelled him to come forward as an agency of evil, which externalised through the brutality he used in achieving his goals. The psychic force of Hitler’s self became rampant and attached to the viciousness of his despotic drive towards carnage and total war. Finally, before committing suicide, he attempted to assuage the pain of his terrible suppurating emotional wound by marrying Eva Braun as a gesture to her loyalty and devotion. Perhaps this briefly re-united him with the tenderness he’d briefly known in his young life.

So who was the real man behind the moustache? To perceive beyond the man and the formal position he occupied, and not just in an historical context, it’s necessary to depart from the standard perception of Hitler. Adolf Hitler embodied the most heinous elements of the human condition, but also messianic qualities that enabled him to touch the heart of the German people. Ultimately, the messianic impulse to serve something greater than himself was overpowered by the unconscious forces that made him a conduit for the deployment of genocide.

Hitler was a tyrant who had to be stopped; but all dictators with a vision to change the world represent something more than meets the eye. In the Rolling Stones’ song ‘Sympathy for the Devil’, in answer to the question: ‘Who killed the Kennedys?’ Lucifer replies ‘It was you and me’. Adolph Hitler, the man, was really inconsequential to the bigger picture. That’s a statement that’s likely to be completely unacceptable to many people, particularly to those whose lives are still deeply affected by that period in history. The truth is that we are an individual consciousness but inseparable from the whole experience of life on earth. Each life recurrence is an absorption of all that has been and, from a deeper perspective, all that can ever be. Somebody had to shoulder the weight of humanity’s confrontation with itself in the Second World War; this responsibility fell to Adolph Hitler.

Life ultimately is the one life being lived through innumerable life forms. In time I, whoever I am, must pass through the entire spectrum of the living experience to be disabused, once and for all, of the need to exist. Hitler and all that he represented is but another expression of life on earth to be transcended. He had to face, as we all do in the end, the accountability for having experienced life as a sensory being. Was Hitler a monster or messiah? Perhaps, after all, he was only you and me.