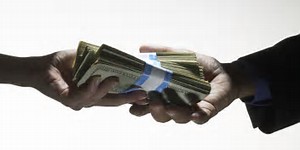 A way of life without money is impossible in this epoch of human evolution. From an early age we’re taught to revere its god-like quality to provide virtually anything that the heart desires. To be comfortably off without any financial worries is indeed a privilege, and can reduce many of the irritations and difficulties that arise from being financially challenged. When it’s a struggle to make ends meet it’s not surprising that many people wish their fortunes would dramatically change with a lotto win or something to instantly transform the life.

But of course it’s not as straightforward as that. If it were, then all the rich people in the world would declare that they are free of anguish and fear, able to love without becoming emotionally attached to their loved ones and be spiritually complete with the knowledge of the truth of existence. But I’ve not encountered this in any of the wealthy and rich people I’ve met. Certainly many of them enjoy a grand lifestyle, and experience a degree of comfort and convenience not affordable to many. But can the true value of life be measured through comfort and convenience or is there something universal that is accessible to all and not dependent on the balance in the bank account?

It’s necessary to be able to handle money; but to be free of its hypnotic power of attachment it’s important to understand how money works. Money is not only the material currency of the world but a psychic energy that keeps the world moving, and the instigating force behind all financial transactions. Any exchange of money from buying a loaf of bread to a multi-million pound takeover deal involves the transfer of energised matter. Money provides the means for the force of matter to be shifted about from one corner of the earth to another. This is crucial for the financial speculators to keep the momentum going. The traders in the financial centres of the world function primarily as mental beings, affixed to their screens in an intellectual quantifying world of numbers and symbols. They delight not only in making money but in the power to manipulate matter at the touch of a button.

The bankers, financiers and industrialists are the high priests of the material age who deal in the trade of shifting values. The currency of money fluctuates, like human emotions, enabling those in the know to strike when share prices indicate it’s time to make a killing. However when anything in existence reaches an excessive peak, the balloon bursts and the world dips into financial chaos for a while. Growth follows recession and after a brief period of respite the cycle repeats itself, stoked by the media pundits to keep the people riveted to the latest news. The only thing that never changes is that the ‘have-a-lots’ keep getting richer and the ‘not-a-lots’ keep getting poorer. The huge discrepancy between the rich and the poor will continue to become more discernible in the coming decades due to the depletion of natural resources and the continual increase of the earth’s population. The shortage of raw materials and living space will lead to increasing civil unrest and hyperinflation, widening the gap between the moneyed classes and the poverty liners. Individual territories will become exclusive dwellings for those who can afford to pay. The super-rich are now untouchable and, with the super-poor, represent an unalterable division that exists as a polarising effect of human nature. So things will never change in terms of the distribution of wealth.

However, life always provides a way to neutralise the negative effects of the world that would sully the quality of living. The manner in which money is earned or handled is reflected in the circumstances of the life. Within each man and woman there is a uniquely creative potential. The tragedy is that most people are reluctant to pursue what they truly love but settle instead for the promise of financial security. The effect of earning a large salary in a stressful working environment undermines the full energetic potential of the money to provide what is truly fulfilling. The unconscious effect is to strengthen the attachment to existence and magnify the fear of loss. Money earned through a living that is creatively rewarding translates as a quality that contributes to the harmony of the life. The unconscious effect of this is to gradually dissolve an individual’s attachment to existence and minimise the fear of loss. It’s only through understanding the psychic effect of money that an individual can begin to detach from its hold.

There’s a famous saying that it’s easier for a camel to pass through the eye of a needle than for a rich man to enter the kingdom of heaven – which only means that the rich man has more to lose by going on. Eventually we must all go on. Money is the adhesive fluid that attaches humanity to the fabric of existence. When the time comes to depart this world, I trust there will be nothing to hold me back. What about you?