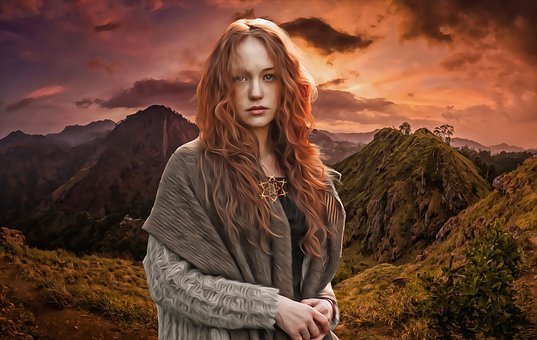 She is the indefinable essence of love, a mystery that no mind can ever solve. This ethereal quality is often referred to as woman’s intuition, which confounds man’s rationality and, if he’s willing, helps to shatter his structural view of the world. Love is all there is of value in existence. Everyone knows this at the core of their being, but the transformative power of love is rendered impotent against the harsh vibration of the world. Built on sexual force, the world is the superstructure imposed upon the earth, and exists to keep love at a distance by stoking the expectations of man and woman with the lure of glamour and sexual excitement. But whatever is achieved is unable to continue as an uninterrupted state of love; and the search for completion begins again.

Every woman embodies the principle of She, but is powerless to come forward into sensory existence as an agency of her spiritual profundity until disabused of her false concepts of love. Woman thinks that the finest expression of her love is to please her man sexually. The truth is the exact opposite. The greatest pleasure for man is to delight his woman in the exchange of sensual love. The female is the passive principle and any assertive or projective movement is a masculine trait that undermines the purity of her nature. However, woman intuitively knows when real love is absent in lovemaking, but often fears the repercussions should she refuse to compromise with man’s overt sexuality. In time, she too becomes attached to the opiate of sex, with the encouragement of society and support of women’s magazines that promote sexual experimentation and promiscuity.

Man’s concept of love and woman’s inherent knowledge of her own true nature are a world apart. Men rarely have time for love but are always looking for sex as a release for their pent-up sexual aggression. The appalling consequences of sex without the reassuring presence of love arise in a woman as self-doubt and periods of dark depression. In desperation to connect with her essential nature, she has babies to fill the void of an empty existence; or else, joins man in the workplace as a puppet attached to the strings of his cunning and manipulative world. Thus does woman, unknowingly, relinquish her command of love even though she may convince herself that she’s in control – until perhaps, depleted of her virtue, she weeps in despair at what she’s become.

It’s possible however to connect with She in those moments of inner stillness, when the world recedes and what remains is the purity of love. She is sometimes visible in art or movies that capture the essence of her inherent mystery. In ‘Braveheart’, a film about the Scottish warrior hero William Wallace, there’s a scene that encapsulates the power of She. In this sequence, a highland wedding celebration is interrupted by the arrival of an English nobleman and his entourage to claim, under a revived law by the King, the right to sleep with the bride on the first night of the marriage. Violence breaks out and the bridegroom strikes a guard, but is quickly overpowered by the English soldiers. The brawl appears to be escalating; but then, in a remarkable development the bride, adorned in her wedding dress, comes forward and immediately defuses the situation. The soldiers step back, powerless and mesmerised by the courage and serenity of She. The bride touchingly bids farewell to her beloved in a silent exchange and leaves, surrendered to her fate but without loss of her essential dignity.

Beauty is the threshold on which He and She meet, the exquisite union registered in the exchange of sensual love between partners. The deepening sensitivity to love reduces existence to an abstract level of detachment where, finally, the lovers merge in consciousness as one. This is the meaning of the biblical passage in Genesis of two bodies becoming one in the flesh. The original state of love is universal and never varies. Just how far humanity has strayed from this sublime state can be gauged by the condition of the world at any time. Despite man’s ache to be united with She, he’s failed just about every time to reach her deepest place of love due to the constriction of his flesh, wrapped in the cocoon of sexual wanting.

Nevertheless, She will not let man rest, even though he may try to escape by leaving the earth in his insatiable quest to explore the sensory universe. She is the spiritual being of the earth and man must eventually resolve his errant desires to find completion in union with his eternal love. When a woman unites with She within herself, she emanates the indefinable mystery that every man adores and searches for, perhaps unconsciously, throughout his earth life. But woman can only be She to the degree that she has loved in form and knows man, so as never to be fooled again. She has transcended any personal attachments, but is loving and straight in her dealings with those close to her. She loves man but serves him by putting honesty to the source of her love first; and will hold unto death to this searing devotion to the unfathomable mystery within her being.