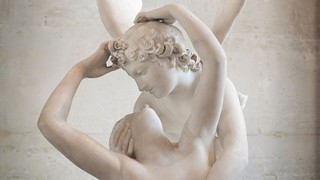 There’s only one soul mate, which is God. The aspect of God in existence in which the soul mate is recognised is love. Love is the unifying principle, ceaseless in its endeavour to bring whatever it enters to a deeper realisation of its immeasurable beauty. To a child the soul mate is the cuddly toy, which represents an inseparable link to love of the universal womb, the place of wonder behind existence. In the emerging adult the overriding impulse is for sexual union with the beloved, the cuddly toy now personified in the flesh by the opposite polarity of man or woman. This is the divine missing half of the person and the whole purpose of life is to re-unite with this original state of being.

The idea of soul mate arises from the recognition of light or purity in another body which connects the individual to their formless love within. This is the basis of attraction at every level in existence. But it’s the mystical element, which often manifests in the first instance as knowledge of the other without necessarily having any factual information about them, that differentiates the encounter as something out of the ordinary. Sometimes there’s a subtle recognition of the impermanence of things, and this has the effect of intensifying the time spent in each other’s company. It’s quite common to meet the soul mate only fleetingly, yet the union endures energetically within the consciousness as a climacteric event in the life. The rarest instance of love between soul mates is through grace where love is served, not only for the lovers themselves but for the betterment of humanity as a whole.

The soul is a euphemism for virtue, which is the light of self-knowledge retained in every life recurrence as the purity of experience. The idea of the soul is to replicate through the struggle of existence the Shining One or unique character, the spiritual essence behind the body. So the soul mate enters someone’s life to mirror in sense an aspect of the being as yet unrealised by the man or woman to take them, if possible, deeper into the mystery of love. The soul mate is concerned only with raising the consciousness of the other by refusing to compromise with the personal feelings and expectations of the self. Sometimes the soul mate leaves or circumstances make it impossible to be together. This happens to break the heart so as to disabuse a person of the false notions of love. Where there’s great love there inevitably follows great pain to enable the personal element of attachment to be transcended.

At the octave of everyday life anyone who serves us, or even catches the attention with a smile in a crowded street, is potentially a soul mate – or perhaps even an angel. Angels are divine beings which sometimes appear to the dying in a vision, as aspects of the compassion of God, at a time of great suffering and acceptance of the inevitability of death. From the eternal realm, where nothing ever moves or changes, there are innumerable lights of incandescent beauty. From a worldly perception this is difficult to discern because the busyness of the mind obscures the reality within. The idea is to give up the force of holding onto existence as a fear of descending into the unknown.

As beings of the Father of Lights, the originating power of creation, we enter existence on a beam or radial line from the eternal. The beam is the bridge between the spirit and the sensory realm. The nucleus of our spiritual identity emits a circular cluster or ring of lesser lights, which is a pod of divine radiance that sends the beam into existence as a signal of light. It’s possible for the pod to emit multiple beams on the single radial line which split into different bodies or life forms. People can be quite unaware that they cohabit with a soul mate or, even more incredibly, for the population of an entire village or community to be the one being or light split into innumerable aspects of itself. Such is the mystery and profundity of this existence.

Love is in a dreadful mess on the earth. Everybody is dying for love but usually not prepared to go all the way when the opportunity presents itself. The soul mate is really a divine intervention until an individual comes to their senses and realises they were born to love. There’s nothing wrong in pursuing a career or being a success in the world, but the energy and drive needed to uphold such a worldly position hampers the possibility of a soul mate coming into the life or even being recognised. The soul mate is undeterred, however, and can often enter someone’s life when least expected.Each of us is a soul mate to another, but only in the moment of being true and vulnerable to love.

However, the soul mate must always remain a mystery. Although appearing in form, the essence of soul mate is formless and impersonal beyond rational understanding. Soul mate is unknowable and can only be intuited as love of all that humanity has ever yearned to feel, touch or inhale as the beauty of nature and the sweetness of the earth. Man and woman embody the idea of the earth and every star in the universe. The idea of soul mate is to become a self-sustaining light or beacon of love. Love is of the earth and the soul of the planet is the resolve of the human spirit to carry on in the great struggle towards cosmic consciousness – our true destiny as ethereal beings in the light of our eternal reality.