Space: The Inside Story 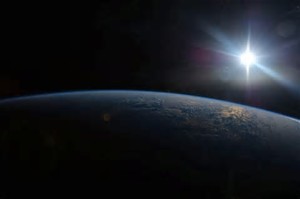 My own spiritual journey has been, to a large extent, the exploration of space – inner space. Another name for space is mind. As space is everywhere and in everything, so is mind. This can be called the impersonal or Divine Mind. Within the all-encompassing Divine Mind is a personal mind conditioned through the experience and impressions gathered since birth. This mind is filled with information and worldly impressions which give a personal perspective of life. Multiply that by seven billion minds, all with personal drives and ambitions, and you get the enormous collision of forces that externalise as the human condition of poverty, greed, injustice and war.

Space pervades everything on earth and beyond to the most distant nebulae. Without it everything would be a solid mass of substance with no space for life to exist. The brain creates space and objects simultaneously, reproducing with incredible complexity the idea of life through the creative genius of sensory perception. Unable to assimilate reality as original unity, the brain is compelled to divide the incoming light of spiritual power through the differentiated senses. Although a seamless system created for the projection of life in sense, there’s an infinitesimal gap between the time taken to perceive an external object and for the brain to confirm energetically the idea behind the form. To compensate for the time delay the original size of the object is reduced, which creates the appearance of space.

Inner and outer space are the two hemispheres of existence and function as the two aspects of the unity of Being. However, the exclusive focus on the external world puts an enormous strain on the wellbeing of an individual. Arising from this inner tension is the drive to find something permanent to assuage the insecurity of being in a divisive world. In fact every negative condition that torments human beings is the consequence of being disconnected from the natural space or wellbeing within the body. The spiritual process is the depersonalising of the mind and emotions of its selfish content and blind ignorance of the greater good. To do this involves a leap of faith, not in belief but in self-knowledge, since to connect with the spiritual idea is to transcend the rationality of the personal mind for direct experience of reality.

The stillness of mind determines the speed of intelligence and depth of perception. A restless mind is identified with continual thinking and unable to be still for long. Someone more conscious can pause to interrupt the momentum of the mind to perceive a deeper significance of the circumstances in the life. As a man or woman perseveres with mastering the wandering habits of the mind, intelligence speeds up and the reality of space is accentuated. When intelligence descends deeper into the psyche there can be a sense of expansion or translucent shapes of vivid colour. Sounds can be audible and aromas can be sensed that have no earthly counterpart. There are many things that are beyond description, but all part of the mystery of the journey home.

Ultimately, the perception can literally ‘look through’ the final objective screen of space and be amazed by the creative process before it takes form. Space is the last layer of materiality to be transcended as a spiritual practice; it’s the closest sensory form of life to nothing. The greatest truth every spiritual master has declared throughout history is that the highest spiritual realisation is nothing. We live and have our being in space and, through grace, are able to realise aspects of this miraculous mystery, either while alive or at death. For some rare individuals the unconscious is realised in the living life as a state of uninterrupted knowledge through the mystic union with God or the Source. However, for everyone, the unconscious is an ever-present reality which can be experienced in a subtle way when, despite relative harmony in the external circumstances, something inexplicable is deemed to be missing. The normal reaction is to engage as quickly as possible in some external activity and dismiss the intimations from within – that now is the time to turn inwards. But for someone who is ready, the journey into space has begun.