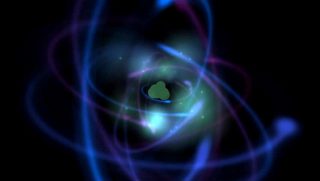 The atom is the power that holds existence together. The splitting of the atom releases the causal power of creation. This devastating discharge of the unconscious unleashes the primal energy of sex and death, and with it the pain and unhappiness of humanity.

Being in a divisive world produces heat or friction that agitates the atomic structure in matter. It’s this continual flux within all things which keeps the world moving as each atom jostles with other forces in the positive and negative polarity of existence. The difficultly is the brain which, unable to process the unity of life, splits the atom into a multitude of lesser forms such as molecules, mesons, photons and innumerable sub-effects. This, to the mind, appears to confirm certain principles that can be applied to phenomenal existence. Nevertheless no scientist or mind can ever negate the effects of the atom to realise the original cause.

The power of the atom is retained in its nucleus, which is a minute portion of original time and matter. The splitting of the atom is but a split in time as the gap between now and then. When time is up, either at the termination of the earth life or in the realisation of the permanent atom as ‘I’, there is peace where nothing exists but all is known to be right. At physical death the atom splits to shatter the resistance of matter attached to the world. As the fragments of self dissipate within the psyche, what remains is pure perception which, uninhibited by personal impressions or concerns, reveals the reality of life beyond the form.

The permanent atom is God, the pinhole of reality through which the idea of existence comes to life. This is the state of unity beyond space, time and motion, and the conscious state of equilibrium that holds the world together. The more timeless the purity of an atom, the less effect it has in existence and the more it functions as an energy of negation. But knowing all and consequently nothing, the timeless being that I am within every body can only be realised by the contrast between the stillness of the inner realm and the external world of movement.

It was the splitting of the permanent atom which enabled life to flourish on the earth. This was the first movement within the higher realm of mind as love separated from truth. And yet love’s purpose is doomed to ‘fail’ but ‘succeed’ at the same time. Love fails because to complete such a task would be the cessation of creation as we know it; but succeeds in giving life its richness, romance and integrity. From love’s mighty endeavour to ceaselessly serve the truth, the lesser but no less important atoms serve in time towards union with the original state of being that is God.