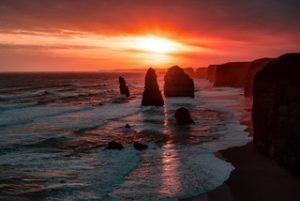 Staying vertical is being now without thought or intent. It’s a conscious state of receptivity to the inner and outer hemispheres of existence. Inherent in the immediacy of now is the power of Will, which is the executive agency of the divine creative source or God. The closest word to describe Will is purpose, which encompasses the idea of life in its myriad manifested forms. Without purpose in the life an individual will operate below their true potential, since the life’s direction will be largely influenced by the personal demands of the self and the aberrant emotional energies. Staying vertical as intelligence in matter is the point of the spiritual life.

Emotional energy, which is created in time and not the timeless, is circuitous and follows a prescribed orbit outside the body in what is known as the aura. All movement of the mind happens in external space which, from the perspective of universal consciousness, includes the subconscious realm. Beginning in the dark recesses of the subconscious, a quantum of emotion arises as a reactionary force triggered by outer events or through calling up the past of some experience stored within the memory. Once activated, an emotion is compelled to reach the surface of existence to the light where it was conceived. But as a reinstatement of living past, its presence in the present creates a conflict in time. This manifests as a selfish inclination in the person to reinforce the pain of existence and to take wilfully for itself.

Magnified a billion fold, the combined emotional force of the world rolls on unabated as a black cloud of negativity which now encircles the earth. This enclave of intensified space is the human intellect, which consists of every idea relative to the human condition of ignorance. These include ideas such as business, wealth gathering, technology, religion, politics, minorities, therapy and various forms of entertainment as an escape from reality – in other words, everything created in elapsed time and not in the original moment of eternity. Virtually everyone on earth reflects off the human intellect continually due to the absence of staying vertical within the body. The effect is a constant drain on the finest energies due to the momentum of the mind literally going around in circles.

Deeper into space is the terrestrial intellect, which is the depository of ideas relative to the betterment of humanity such as love, truth, virtue, compassion and justice. These ideas are continually informing humanity, but are degraded as they pass through the denser level of the human psyche before entering the sensory realm. Only in someone whose personal space has been purified sufficiently through living the divine life can these inspirational ideas be effectively communicated without causing more doubt and confusion. The quality of space, both inwardly and in the objective universe, becomes finer the deeper the perception is able to reach.

Spiritual power ‘travels’ on a vertical trajectory though the gradations of the psyche but is unable to enter existence in its original state of purity. Consequently, anything to exist bends or bows to this invisible but all pervasive source of reality; this is why there are no straight lines in nature. And yet as a spiritual imperative, the way through the emotional resistance of self can only be realised by staying inwardly vertical to offset the forces of existence. To this end is love, the conveyer of truth as the two aspects of life lived through these mortal forms. When love and truth are aligned as the divine radials of supreme intelligence and beauty, the simplicity of being is supported by the clarity of intellect and peace is restored to planet earth.