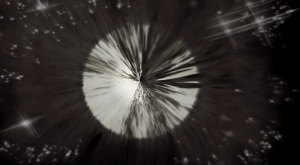 The creative point is a perception of the original moment of eternity. It’s been a continual revelation and focus for me since being inducted into this eternal idea through the presence and teachings of the spiritual master, Barry Long. What I call the creative point manifests as everything in existence appearing and disappearing in a micro interval at a velocity beyond the speed of light. The recognition of this one and only causal event demonstrates the truth behind science’s big bang theory, except of course it is apprehended now and not as some cosmic event two thousand million years ago.

The truth of existence is accessible to anyone. However, until the perception is refined, the mind will dismiss the formless inner space as an indication that there is nothing beyond its own understanding. This apparent void is a necessary precaution to shield the perception until it is able to contain and encompass the pure spiritual idea. But by holding to the apparent isolation and absence of experience, the space within the space gradually reveals the pure essence of life before it takes form. This purified space is infused with the radiance or presence of spirit, which is registered as the creative point of light within the mind.

It’s the connection with the creative point that provides the artist with the inspiration that distinguishes every work of art with a timeless quality and the hallmark of originality. The same principle applies to all other modes of creative expression. The difficulty is that people become attached to their creative pursuits and fail to address their whole living life. Science’s pursuit for meaning in the objective universe is similarly polarised and avoids altogether the thorny issue of death. This results in the creative point being only partially activated and gives rise to the feeling that something fundamental is missing in the life.

Until the individual has begun to detach from the magnetic pull of the world, the creative point is unable to retain its brilliance. It’s always there, but imperceptible to the fluctuating movement of the mind. Light is self-knowledge, the doorway to our origins and the original state of man and woman. This light is neither dark nor bright; it is colourless but shimmers as the most beautiful radiance beyond imagination. The creative point is the idea of love on earth, preserved in eternity and replicated within each human being.