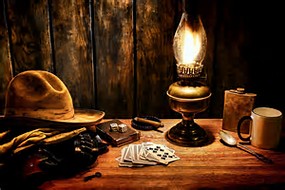 The dealer arises on the wave of unhappiness within the family, society and the world at large. The first deal is made at an early age when the sense of separation from the womb creates intermittent feelings of isolation and despair. The dealer offers the child an alternative world of imagination and wonder where, most importantly, no-one else can intrude. The deal is that the child, being vulnerable in its absence of experience, has the dealer’s protection from the outer forces of existence. What fun they can have together creating an inner fantasy realm to cushion the blows of the loveless world where it’s so hard to be heard and understood.

There are two basic commodities from which all other deals arise during the course of the living life. These are compromise and duplicity. The deal of compromise is first made when the child realises that adults are not being true to the ideals they espouse, such as to be more loving and kind to others when they themselves demonstrate the opposite in their behaviour. The child quickly gets the message, which is that everyone in considering the feelings of others is being dishonest and must resort to duplicity to deal with the emotionality of themselves and those around them. This is the trade-off which breeds discontent, resulting in the periodic release of anger, frustration and other negative effects of the human condition.

The choices and decisions made by most people are at the dealer’s behest and not a conscious action of the individual. Deals are made in the world, seemingly for the benefit of an organisation or to succeed in a personal enterprise. But to the dealer, now firmly entrenched within the personality, the outcome is irrelevant as long as everyone keeps moving and can be emotionally manipulated. When a group of people get together, particularly in mixed company, a favourite trick of the dealer is to strike up a conversation at a superficial level and, imperceptibly to the mind, engage at a psychic level with other dealers at the table. The connection is usually made with the underlying tension (compounded by sexual innuendo) providing a bridge for the dealers to participate in psychic games-playing.

However, the dealer doesn’t have it all its own way. Sometimes, at a point in a man or woman’s life, when the pain and struggle of existence becomes unbearable, there’s an inner opening when the dealer is seen in the light of self-knowledge and exposed as a fraud. Alarmed at being caught off guard, the imposter quickly disappears into the depths of the underworld. There can then be an experience of great inner joy and a freedom that was within the child before any deal was struck. After a short while the dealer returns with an invitation to share in a little quality time and recreation. For instance, for someone who has recently given up smoking or drinking, the dealer may create the feeling of the desperate need to repeat the experience with enticements such as ‘just one won’t hurt’. Or, for someone endeavouring to transcend the need for masturbation, it recreates an almost irresistible compulsion for release.

There comes a time when all trading is suspended and all deals must cease. The task is immense since the dealer is unyielding of its position. When the dealer feels threatened it can trade harder and make more extreme deals, not unlike the city traders during a financial crisis. However, in expending more and more of its emotional force, the dealer becomes vulnerable and has to extend further out into the light of the world. Light is love and has no discernible value to the dealer in the dark recesses of the subconscious. The incredible truth is that the dealer is really love, but emerged in existence twisted and contorted in the struggle to extract itself from matter. The dealer must now be informed and then transformed back to its original state.

Love is love and can only be known now in the moment and never in the past. Dealers and deals are made in time and rely on duplicity to hoodwink the unwary. Love is the end of all compromise since there are no concessions or personal attachments to sully the purity of its timeless mystery. Love can do the job when a man or woman is willing; for love is our natural state before any deal is done.