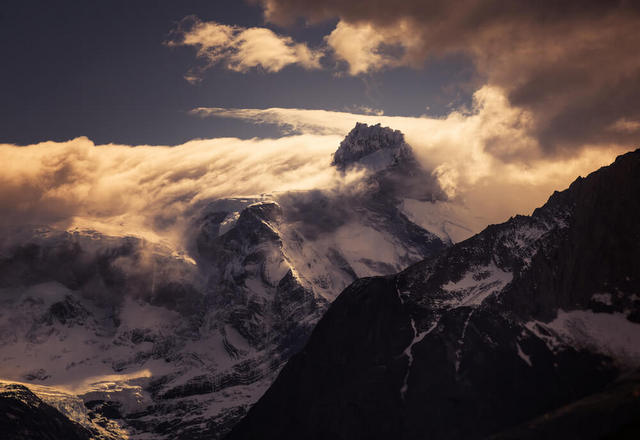 Mountaineers have a term to describe a high altitude area, usually above 8000 metres, where the air is so rarefied there’s not enough oxygen to breathe. This is called the death zone. Most fatalities on Mount Everest have occurred within this perilous part of the mountain. The outer challenge parallels the inner journey where the climber must scale the invisible mountain and pass through the death zone to unite with the pinnacle of their spiritual being.

Everyone makes some progress up their own personal mountain during the process of living. But what happens is that, with increasing altitude and harsher conditions, there’s a pressure to return to base camp and the comfort and security of the world. For those who persevere, just as in the physical ascent, the climb becomes increasingly absorbing, with a growing detachment from things once so valued. By this time, the drive of the old emotional way of life as a repetition of experience has been greatly transformed to enable the climber to breathe the rarefied air.

The death zone is the level of mind which is the ring-pass-not for mortal man. Approaching the death zone, the climber experiences acute fear and apprehension. The initial impulse is to withdraw further down the mountain to safety, but it’s just a ploy to test the individual’s resolve. For the valiant, this is the point of no return where the only way is up. There’s no choice now but to go on, even though he or she is racked with uncertainty of what’s on the other side. What follows is a period of extreme aridity and a heightened sense of isolation. This is part of the purification process and parallels the external adjustments to being in such a hostile environment.

At this altitude the psychic effect on the sensory registration of things can produce hallucinations, as reported by many mountaineers. What happens in the physical sense is that, to compensate for the lack of oxygen, the body shuts down unnecessary leakages of vital energy. This magnifies the perception of space through the reduction of sensory data of external objects. From the spiritual perspective, the energy normally projected outwards is now contained as an inner focus and enhances the knowledge of reality behind the form.

The negative side-effects of the death zone continue until the release of the new energy has been absorbed by the entire psychic system. The direct experience of the death energy can induce extreme behaviour, delirium and can even cause madness with prolonged exposure. Many schizophrenics and others with severe mental disorders have no natural immunity to the psychic forces which attach themselves to the incoming current from the death zone. The spiritual process of self-sacrifice prepares the mind and body through acclimatising the inner system in a similar way to physical adjustments in the body of the mountaineer.

The elusive quality, and perhaps the inner calling of every man or woman who ventures to the top of any mountain, is supreme aloneness. As the earth is alone in cosmic seclusion within the blackness of space, the realisation is that I am the only one amongst the appearance of the many. It’s said by the indigenous people who live near the great mountain ranges, that at the top of each peak resides a divine being or god. Although alone am I at the top of the mountain in my spiritual oneness with creation, I’m not exclusive of my fellow man and woman and willingly participate in the everyday affairs of the world.

In the physical ascent, the summit is reached in a relatively short time; scaling the inner mountain can take a lifetime. To reach the summit of the spiritual mountain, an individual must be prepared to make the ultimate sacrifice. The true meaning of surrender only reveals itself during the passage through the death zone. This is the final humbling for the climber who dares to realise the truth of their self. Ultimately, this is to be what I am in the inseparable union with God, the Being behind the form.