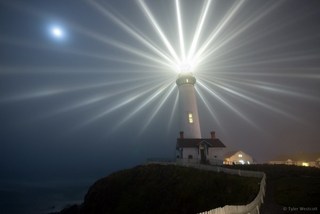 The divine beam is the permanent light of God. This eternal emanation radiates into existence as the spiritual idea of the earth in all its uncompromising wonder and glory. The light emitted from the divine beam is what I call the stellax. This light is similar in character to original time as cause and effect without interval, appearing as whatever is happening at any moment.

Original time is the conveyor of reality, which is implicit in the divine beam and the way in which the inner and outer worlds are kept in unison. Time as we know it is not original time. What we call time is really a convenience in which to measure the interval of elapsed time between something in the past and the present or as speculation for the future. An individual’s reality, in terms of spiritual presence, is determined by the time waves which manifest within the psyche as the emotional body and attachments to the objective world.

At the beginning of time, with no past to distort the transmission of the divine beam, man and woman existed as dual aspects of the spiritual idea of the earth. Entering existence on the spiritual wave of the stellax, the consciousness centre of the being expanded as a formation of light which blended with the natural abundance of the earth. It was possible then to sit within the psyche of a tree, or to be the rain or any of the elements, because at this phase of evolution human beings had no formal body. This was the origin of the Aboriginal dreamtime and the many other creation myths, where it was said that human beings were able to enter and withdraw from existence at will.

The externalising of the physical form came later in time as the bodies hardened due to the inrush of past, which pushed the principle of Man as intelligence further out from the timeless state within as identification with the material world. This original state of being hasn’t disappeared and many people have touched this place at some time or other. However, over the millennia the great body of humanity has been covered over by layers of emotion which have formed as strata of past experience within the human psyche.

The lighthouse is symbolic of the divine beam, which creates radial lines as conduits for innumerable lesser lights to enter existence. Each human being enters and withdraws from existence on these individual radial lines, which combine to form the radix of humanity – the combined spiritual essence or lights of all life ever lived. We are all lights, some shining a little brighter than others, but combined we produce a magnificent spiritual idea called humanity. Within the individual, it’s the luminosity of the enlightenment point in the nucleus of the brain that’s a measure of their spiritual perception.

There is now a fundamental shift happening in the world psyche, perceived by many people sensitive to the plight of humanity in the current climate of global uncertainty. This is due to the release of a new cultural idea which is gradually rising from the unconscious to the surface awareness. The energetic release of this idea will revolutionise life on earth. From a spiritual perspective, the idea is enabling a way back to the original state of being in a far swifter time frame than was possible before now.

The point of life on earth is to beam the good news from the eternal realm of the supernal idea that is existence. But as a race we are mostly in the dark as to our cosmic origins and the purpose of love. Love is our ground, without which the divine beam is diffused and unable to enlighten the way back to reality. From the eternal perspective, where all is still and unalterable, nothing has ever changed since the original moment – nor ever will. What has changed, and is evolving on the motional side of the universe where we exist, is intelligence as a movement towards the realisation of something permanent in a world of perpetual change.

My role as a spiritual teacher is to build upon the knowledge of what has been realised as a way for a more direct experience of reality. In the coming year I shall be introducing new ideas consonant with the times for anyone receptive and willing to participate. These will include areas concerning light and the stellax and, most importantly, the creative point within us all from which the divine beam originates.