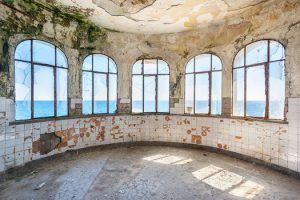 The enemy within is an entity which has subverted life on earth. The enemy’s name is self, but it’s only the enemy when it’s allowed to create misery and despair. This it does as an extension of the universal disorder of unhappiness in the world. The self is everything apart from one thing – the spontaneous joy of life, which is forever present underneath the doubts and insecurities of the person. Stillness alone is able to penetrate the deadening crust of emotional pain that each must face as the price of being in existence.

The self is a master of subterfuge and pounces like a panther whenever the guard is left down. The only protection is to remain conscious and alert in the senses; this neutralises any movement of the mind. The difficulty is the speed in which emotion takes over the body consciousness, setting in motion a delta of negative effects. People lend themselves to errant psychic energies through being hoodwinked by an emotional payoff that is registered as either a positive or negative feeling.

Unless someone has spent time within their body through meditation or other stilling techniques, the workings of the self will be difficult to discern. It’s impossible to deal with emotion while it’s active and virulent. The most effective time to practise self-observation is when all is calm and the mind is quiescent. Later, with a deepening self-knowledge and the ground of truth to steady the mind, any emotional confrontation can be used as a way of undermining the negative force of self in the immediacy of the exchange. This is done by remaining as detached as possible from what is happening, even though there may be symptoms of distress. When there’s sufficient consciousness behind the emotional force, it’s possible to retain a presence of equilibrium whatever the situation.

With the attention inwardly focused, surround any emotional disturbance with the consciousness, which is the purity of space between any movement of the mind. To reach this state, all that’s required is the willingness to surrender to the subtlety of the inner stillness. The emotion will try to convince you to get up and do something or perhaps create some physical discomfort to get you to move. It’s to hold to the sense of higher purpose and to perceive what’s happening while being absent as any position of mind. To do this whenever reminded eliminates, in time, the false body of self and with it all the problems of the world. The enemy within will only yield to pure love, which is the power of spirit in matter.