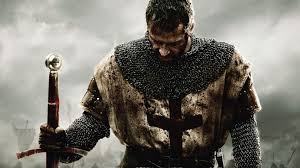 Western civilisation emerged from the Dark Ages on a wave of conflicting religious faiths. From the fanaticism of the East to the emotionally driven West, the stage was set at around 1100AD for a conflict from which the repercussions continue to affect the stability of the world to the present day.

It was the time of the first crusade: a dispute between Christianity and Islam over sovereignty of Jerusalem, the spiritual centre for both religions. Responding to power struggles within the Byzantine Empire and threats to vital trade routes hampered by Seljuk Turks, Pope Urban II rallied the faithful in a rousing speech that succeeded in stirring the emotionality of the masses. The tenets of the teachings of the founding master Jesus of Nazareth were conveniently put aside, while priests and holy fathers (the political spin doctors of the time) inculcated the people with hatred of the infidel and the blood-lust for death and destruction. It was a masterful stroke of propaganda.

Having been granted ‘plenary indulgence’ by the Catholic Church, the crusaders were supposedly absolved of any sin in whatever action was necessary to reclaim the holy land. This was really the disclaimer to indulge in unspeakable atrocities and to show no mercy to the infidels. The fighting forces, as well as the civilian hordes that followed in their wake, underwent enormous hardship in their quest for occupation of the sacred city of Jerusalem. But could slaughter and bloodshed ever bring about a peaceful solution to unify religious differences? Or was it just a demonstration that whatever is sought as peace and salvation in the outer world is impossible before man and woman are first changed within. Two thousand years on and it’s business as usual in the holy land, where religious intolerance and conflict is as rife now as ever.

Every country, continent or region resonates to a unique pattern of the terrestrial psyche. Africa is often cited as the cradle or ancestral birthplace of Homo sapiens. To me, Africa is indeed the womb of the earth. The lush and vibrant nature symbolises the wildness of nature untamed and the fertile ground where the elemental forces of life were conceived. Israel and the surrounding areas of the Persian Gulf symbolise the birth canal, the entry point from which life was disseminated upon the earth. From here the emanation of love from the earth’s spirit filtered through the psyche into existence. It is this deeply subconscious pull to return to the source of life that accounts for the intensity and fanatical resolve over the millennia to enter and reclaim the sacred land. But it’s been a case of mistaken identity through the distortion of the religious idea. Religion, in all of its tenets and indoctrinations, is an attempt to reconcile the distance travelled into existence from the original state of the womb.

The volatile struggle between Israel and the surrounding Arab states has created a dynamic tension that agitates the wellspring of the human psyche. But, like a magnetic vortex of immeasurable power, the negativity of the combined unhappiness and discontent of the world gravitates back to this place where it all began. The pressure, which has been building up since the last great flood that devastated the ancient world, is periodically released through the world psyche as shock waves manifesting as earthquakes, catastrophe, revolution and periods of civil unrest. Existence is a war of attrition, the meeting place of extraordinary forces that continually break up the structures that threaten to choke the harmonious flow of life. The cyclic movement of seasonal change performs this task as part of the natural way of things. War and destruction is the way in which humanity parallels the same process. It’s an endless process of death and rebirth until, through Grace, something happens to an individual that signals it’s time for a final reckoning.

The final crusade is the reckoning for the world and will be instigated by religious conflict and violence – but with far greater consequences for the future of the human race. Tension and provocation due to the atomic threat posed by Middle Eastern states and provinces will be the external catalyst for the nuclear destruction of western civilisation. No one can say exactly when this will happen. The only certainty is that it’s coming; and there’s nothing anyone can do to prevent it. However, for the individual man or woman, the final crusade is ultimately an inner battle and begins when the belief in the world has been shattered. This is an intensely personal experience, often triggered by traumatic events that penetrate the mind structure of an individual and instigate a profound change of life. The challenge is then to confront the sentinel of ignorance, which is the pain of living past: the build-up of all the emotional negativity and unhappiness gathered since birth.

The physical body was once known as the temple. A temple is a sacred space, the dwelling place of the Lord; but it has been desecrated and profaned. In violating what had once been pure, the task is now to somehow clean up the mess and restore peace on earth in as much as this can be accomplished within an individual. Anyone reading this will know to some degree what this entails. The dismantling of the pillars of the temple, the ignorance of unconscious living, creates space that releases the knowledge of life and love. Love, the sustaining quality of life on earth, has been gradually eroded over time from its original golden essence to a vapour of its former beauty and glory. The willingness to endure any necessary pain and suffering is the mark of virtue that provides the catalyst to transform matter into an ever finer transparency or receptivity to life. This burning out of the ‘defiant one’ eventually purifies the inner space that restores the temple to its original state – and amazingly negates the need to ever suffer again.