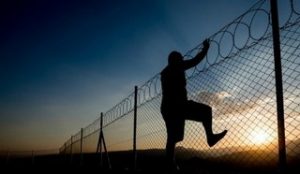 The great escape is the biggest break-out of all time. The escapees have never been brought to justice and, except in rare instances of self-sacrifice, continue to be at large in the world.

At a planetary level, the great escape of humanity has externalised as a field of conflict and disharmony that now encircles the earth. Global warming, greenhouse gases and the pollution of the oceans are all symptoms of the human condition of unhappiness. It’s no surprise that humanity is looking to escape into space to create a new Eden in some distant galaxy. But what is it that we’re so desperate to escape from?

It’s the escape from facing my self. This is hardly surprising because the self consists of past as the pain of unconscious living. The self is everything in existence except for one thing: it is not the original state of being, the purity within every body. Nothing wants to die since the desire to survive is an imperative of life. Consequently, having experienced the full spectrum of sensual delights, the self will not relinquish its control and is prepared to fight to the death. As a counter measure to protect its position, sophisticated and ingenious distractions are now in place to preserve its hold in existence.

The world cannot avoid its fate – its descent into time and progress has been set in motion and must complete its evolutionary phase. The impulse to escape is almost overwhelming as the human race has become transfixed by the massed hypnosis of hope for a better future. Only I, the individual man or woman, can rectify this error of perception while alive by being willing to journey back through the subconscious, the domain of self, to the source of love on the other side.

Ultimately, there are only two real choices. To continue to run, which is to escape from my self through making excuses that it’s too hard, or to make a stand and face the truth of life as a man or woman of the earth. Nevertheless, through the challenges of the living process, we all have to be made responsible in time for the creation of our own making. That’s the justice of it all and cannot be refuted when the truth is perceived.