The Intellect and the Mind 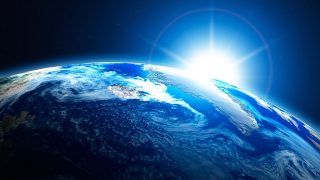 The intellect is our reality. It manifested in the original moment of eternity to encompass what, in sensory perception, would be the blackness of space between the stars. From an inner perspective, the intellect is the depository of every idea that could ever be conceived, held in its pristine and timeless state. The true spiritual identity of each of us is a unique radiant idea within the eternal intellect.

Our living life with all its challenges and hardships is the way in which our miraculous profundity is realised in existence – the only impediment is the human mind. The mind is not the intellect; in truth they are a world apart. The mind began to formulate within the psyche as an extension in time and past as the first effect of consciousness. Its appearance within the pre-conscious was not unlike the time frame camera sequence of ice crystals developing on a line of finest lace. These traces of mind developed in time into intricate structures of increasing complexity in response to humanity’s rational understanding of the world.

The function of the mind is to deal specifically with the practicalities of living and to process information relative to the objective world. The mind works reasonably well when focused on matters that involve a plan of action or assessing possible outcomes in worldly situations. But when the same mind looks inward for answers to the deeper meaning of life, it’s completely flummoxed. As an effect and not an original cause, the mind is an instrument of time and always a fraction behind the immediacy of the moment. This means that the perception of the mind is limited exclusively to the things that have manifested in the material world.

The mind associates stillness as a threat to its survival and something it is highly skilled in evading. The psychological effect is to equate the peace of mind as a sign of madness and to ridicule anyone or anything that suggests a superior intelligence than the mind’s own ability to reason. But in all recorded history, no mind has ever been able to answer the two fundamental questions of existence: namely the truth behind death and our origins as self-conscious beings. So we have the extraordinary situation of being in a world that recognises the mind as the acme of intelligence, with virtually no knowledge of the superior function of the intellect.

Today we embody both the timeless state retained within the intellect together with the momentum of thousands of years of the mind’s progressive drive into matter. The spiritual task is to somehow unite these dual aspects of perception as an integrated system of intelligence. However, the approach to reality is further hampered by the emotional body, which merges with the mind as an entity of self, pathologically attached to the polarities of pain and pleasure in existence. When the mind is focused on any emotional disturbance, it’s compelled to follow in a circuitous pattern – a vicious circle of worry, anxiety and fear.

So how in the scheme of things did we as a race become so separate from our innate connection to reality? Each personal mind is now conditioned with attitudes and feelings that are either for or against anything that appears to conflict with its particular point of view. The combined result is the billions of minds of humanity vibrating collectively as nations and allegiances to a particular emotional frequency consonant with their personal wants and desires. As a consequence of the mind’s fixation with its own rational perspective of life, we’re stuck with the delta of problematical effects which ceaselessly roll on as the human condition of unhappiness.

The reflected light of the intellect is consciousness. Consciousness diffuses as the beam of divine light or spirit from the intellect to the nucleus centre of the brain. The degree of luminosity at this centre determines the depth of perception necessary to realise as direct knowledge the most profound mysteries of life and the universe. Ideas are activated by the release of higher knowledge for the advancement and evolution of humanity through the intellect. These include ideas such as anaesthetics, electricity, D.N.A. and nuclear fusion. All the brilliant ideas of various people are not as a result of focusing on the mind, as is the common assumption, but from the focus on the intellect. The ideas themselves are impersonal and often realised by more than one individual simultaneously. As the idea is brought into the world, its original essence degenerates in purity as the mind busily engages in exploiting the new discoveries for profit and personal gain.

The intellect is where we come from as cosmic beings in our original state of being. The light of the intellect is not unlike a magnet that radiates an enormous gravitational power which pulls everything that has lived on the surface of the earth back to its source. Having extended so far out in time to the extremity of existence, we’re all eventually compelled to come home. The momentous task is to be able to face the shimmering light of the intellect so as to pass through it to the other side. What’s on the other side of the intellect? Another facet of the divine mystery called infinity, where non-existence and something else beyond all superlatives resides.