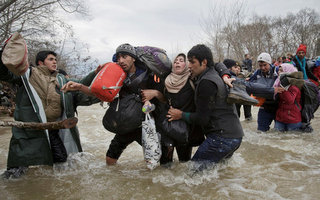 The migrant crisis continues to escalate as many thousands of refugees and asylum seekers struggle to find shelter in Europe from their war-torn impoverished lands. It’s a dreadful situation, made more tragic by the perilous crossing undertaken by fleeing migrants across the Mediterranean resulting in many fatalities. Throughout history there has always been the dispersion of the oppressed, either to escape persecution or through war and famine. Nothing has changed – except that now we can watch the graphic portrayal of the suffering through the high definition lens of the media.

The current migrant crisis represents a haemorrhaging from the weakened body of humanity. Humanity as a totality represents the one consciousness of planet earth. The body of humanity is represented by the world’s population at any time. This body is sick, wilting under the relentless depletion of its virtue through the wilful and reckless arrogance of human nature. As the migrants spread across the physical terrain of Western Europe they become increasingly exposed to the most heinous effects of the human condition. These sinister forces emerge from the shadows in the guise of human traffickers or radical extremists that prey on the vulnerable and weak.

Migrants and asylum seekers are seen by many as the lepers of society that no country or government wants but is morally obliged to be seen as supporting in some way. They represent the new wave of wretched untouchables in a global culture being made to confront the unsettling truth of its own making. The pressure is on for the European Union to find a political solution. There’s no solution – only compromise. The truth is that the majority of Europeans wish the whole thing would go away. Germany, still battling with its conscience over its handling of the last great migrant dispersion in the Second World War, has agreed to take more migrants than any other country. However, the sheer numbers involved is making it impossible for the authorities to process them into the social system. The incessant flow of migrants desperate to breach the borderlines is resulting in evermore violent confrontations with security personnel, poised with their fingers on the triggers of their automatic weapons.

In going it alone in revolt against our original Divine nature, we lost sight of the purpose of life: to be joyous as beings in this glorious existence. What’s coming next is another wave of effects that disguise the fundamental cause behind the appearance of this world-shaking situation. Civil unrest on an unimaginable global scale is pending. It is unavoidable. There are innumerable other trouble spots across the globe that are all imperceptibly linked by a virus that has been contaminating the planet ever since the beginning of time. The virus is cruelty, greed, discontent, anxiety, fear, and the sense of isolation arising from the absence of any reality in a world of shifting values.

The migrant crisis is a precursor to humanity’s confrontation with its self-made nature. This is due to the failure to devise a world civilisation where everyone is recognised as a unique individual able to be free from the restraint of tyranny and oppression