The Narcotic Dream of Paradise 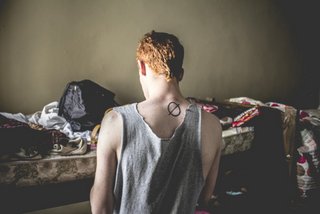 Every child, either at school or through their circle of friends, will have the opportunity to participate in the drug culture at first hand. It’s unavoidable because of the proliferation of hard and recreational drugs that are now endemic in our modern world. Drugs represent the narcotic dream of paradise on earth; the escape from the pain of existence and the harsh realities of a loveless world. Some people come through the drug scene relatively unscathed whilst others become casualties of a habit beyond their control, wasted and pathetic shadows of their essential human dignity.

The ingestion of drugs, such as marijuana, ecstasy and heroin, creates euphoria and a heightened awareness that occurs as the mind and emotions converge energetically with the substance of the drug. What happens is that the psychic structure of the drug is really an entity that has no mind or feelings of its own in which to experience its existence. Within any atom is a centre of gravity which attracts what is needed to advance its evolutionary status. The atom within the psychedelic drug LSD, for example, attracts a suitable donor body in which it can realise its own creative source within a psychic field of sensory perception. The individual assumes that they are the one having the experience, unaware that it is the drug experiencing itself. This is why people can’t usually remember the inner revelations experienced while they were high – it was the drugs themselves that were having a good time! The drug user was merely experiencing the secondary effects.

In the halcyon days of human evolution, potions and mind-altering substances were taken into the body as a way of communion with the earth and its mystical inner nature. Shamans or medicine men used the power of natural narcotics to initiate those who had earned the right to enter the other side of existence. In these earlier times the substances were able to blend with the simplicity of the psychic system within the body without negative effects. As time and past became an impediment to the inner harmony of life, the purity of the drugs ingested became sullied through the emotional force that was the dominant effect of humanity’s progressive drive. From taking the substances of nature as a way of communion with the mystery of life, drugs became a palliative to counter the pressure of living and for temporary respite from the inner demons of the self. Today recreational drug-taking is widely practised and millions of people worldwide are comfortable with the way things are. There are also many addicts chasing the ultimate high that inevitably leads to jail or death – and misery for the loved ones left behind.

The only worthwhile experience I’ve had through taking drugs was the relief of having been freed of the need of them, having passed through my twenties in a perpetual cloud of hashish smoke! And that’s everyone’s experience who has ever managed to kick the habit. The allure of drugs is there to tempt the individual to escape into the narcotic dream of paradise. They can give an insight into reality but it’s never permanent. And there’s a hidden price to be paid for whatever is gained. The psyche has an integrity that’s an aspect of the divine harmony which the principles of existence must follow. Whatever is glimpsed as an inner revelation through drugs sets in motion events and circumstances in the external world to counter-balance the psychic opening. This often takes many years to be fully assimilated within the psychic system of an individual. For longtime users of heavy drugs, it can take a lifetime to recover from the effects. For those who just smoke weed and can quit in time, the main negative effects of lethargy and restlessness may eventually recede.

From a broader perspective, it’s because of the absence of real love between man and woman that drugs were introduced into the mainstream of the world psyche around the time of the mid sixties. Up until then drug-taking was something of a bohemian pastime popular with the fashionable set, or kept at a respectable distance on the fringes of society. The introduction of psychedelic drugs was part of a cosmic initiative to obliterate outdated brain cells in as many individuals as possible for the next phase of human evolution. Through the assimilation within the human psyche of the drug-induced experiences, there is now a broader comprehension of the effects of psychedelic matter within the realm of inner space. As a consequence, this now enables those receptive to the truth to have the direct experience of reality without the need of drugs or any other external agency.