When Love Meets the Devil 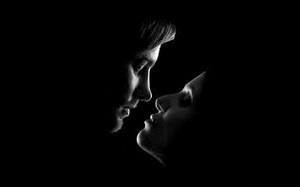 When love meets the devil it’s usually the latter that prevails. The devil is sex and the craving for experience, forever striving to enter existence through the possession of the mind and emotions. Just as space enables everything to pass through it, love offers no resistance to the onslaught of vice and promiscuity in the world. Love is a mighty negation and the only transformative power able to slay the devilish beast of sex. Stillness and right discrimination, together with the experience of living, are all that’s provided for the epic encounter.

Sex is the most powerful energy in existence, but only the human animal is troubled by the pure sexuality that is the divine creative essence of life on earth. In its benign state sex is really love, but only in the absence of excitement, wanting or intent. As soon as the mind reflects on the formless, inner reproductive energy as thought or imagination, love is immediately corrupted and becomes sex. This creates agitation and the compulsion to find a release in which to relieve the mounting inner discomfort. Masturbation or violent outbursts (often directed against those whom an individual professes to love) usually provide a temporary respite until the psychic force begins to gather once more. People are mostly unconscious that anger, irritability, resentment, hatred and self-doubt are all effects of the psychic possession which distort the perception of life.

All inner pain arises from sex, which in isolation from love creates a vibration in matter. Over time this forms layers of hardened emotional resistance that are sustained by the vital life in the body. This is why so often a person can feel drained and depleted of their virtue, which is being continually subverted by the devilish hold of mounting sexual frustration. It’s this inner restless force that drives men to madness, or else to make a name for themselves in the world as an artist, industrialist or travel to Mars. Anything but face the devil of self – the sexual ignorance and indulgence of the past.

Heat is the catalyst for transformation within the atom of a brick or a star. When love is consciously made in physical union, the destructive element of heat is neutralised to varying degrees. In the absence of excitement and the overt need for orgasm as a release of sexual tension, the presence of love is retained within the body for longer periods. This restorative energy is then able to penetrate and transform negative effects gathered through past experience of unhappiness. When someone has suffered enough and the focus within becomes a conscious part of everyday life, the emotional pools of negativity begin to evaporate. At a certain threshold of self-knowledge, the divine spark ignites a sort of spiritual fire; and so begins a deepening process of self-annihilation. The Christian Church’s way of confronting this was to burn people at the stake to ‘loosen’, so it was proclaimed, ‘the inner demons of the soul’. The devil in religion was always perceived externally in someone else and never within the priest or members of the congregation.

Anyone who has ever dared to love has encountered the devil in one guise or another. It’s totally shocking when the mask is removed and there in the flesh is the grotesque, contorted face of the devil without pity or shame. Every woman has seen facets of this monster in man, as she has felt the rage of being in a loveless world that has reduced her, in most instances, to compromise in love. The deep trauma of betrayal is mirrored today in the global reaction of fury by many women towards the newly-elected President Trump. But no one man is to blame; the diabolical parasite of cunning and deception is far more insidious than can possibly be contained by any individual. Humanity is both devil and saviour appearing as the condition of the world at any time.

Love is woman’s nature and the only hope for humanity; but love requires her to be vigilant at all times and wise to man’s devilish ways. Man is sexually possessed and, despite his sincerity and persuasive words, is rarely able to deliver the goods. But, paradoxically, he is the personification of her love, and she cannot be complete and fulfilled without him. Likewise, man’s deepest yearning is to be worthy of her love. Honesty is the prerequisite for harmony in a partnership. The devil is dishonesty, never revealing its hideous intent for control and possession of another. The warning signs are there when emotional negativity rises to the surface and allowed to fester instead of being addressed in the moment. When a woman is true to love and refuses to be available for man’s selfish satisfaction, she will inevitably invoke his wrath. He’ll accuse her of being frigid, or even a lesbian, if she refuses his sexual demands. And the tragedy is that she often believes him and sinks further into depression and self-doubt.

When love meets the devil there can only be one outcome. The justice and integrity of life is that everyone must pass through the hell of their own making, whether consciously in the living life or at death. Love and the attraction between man and woman is a burning desire for spiritual union in the flesh. The fire that eternally burns in the body of humanity is the life and death process of sexual desire and craving. From the outside looking in, the vision is of a hellish cauldron of human depravity and suffering. When the sexual self is purified, the fires of hell no longer burn; and what was once feared is realised to be a place of unimaginable wonder and glory. Until then it’s business as usual while the misery and discontent of humanity rolls on.