Where on Earth is God? 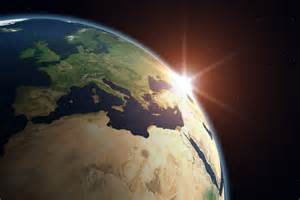 People often ask how can there be a God that allows wars, poverty and exploitation, and particularly the tragedies that afflict the young and innocent. Every spiritual teacher or guru throughout the ages has endeavoured to answer this question, as do religionists, philosophers and the more perceptive people of our times.

The difficulty is that people have made a concept of God, which is to interpret someone else’s experience instead of the direct knowledge which reveals the simplicity and profundity of truth. The conceptualising of God accounts for the wide range of discrepancies in religions and many spiritual teachings, as well as atheism and scientific materialism. We’ve all been exposed to some degree of scientific rationality which, even as a background vibration, tends to deaden the sensitivity to intimations of the inner realm.

Science and religion have galvanised the human psyche throughout history to produce a world civilisation now on the brink of self-destruction. Paradoxically this has had the effect of releasing deeper inspirational knowledge of the original earth idea to those receptive to its transformative truths. The difficulty is that the power surge has also dislodged the most hardened and protected layers of the world psyche that have lain dormant for millennia. These highly volatile and destructive energies now provide the catalyst for terrorists, and for anyone seeking to radically challenge the complacency and hypocrisy of western thought and culture.

God is the state of equilibrium within the psyche that holds the entire creation together. Without this omniscient presence the world would implode under pressure of the opposing forces of existence. However, God is not responsible for the atrocities committed in the name of religions or beliefs, or for those possessed by anger and hatred. It is we human beings who elected to go it alone in defiance to the Will of God, which did not interfere with the affairs of humanity in the creation of a world without love. The terrible consequence is that we set in motion a law of cause and effect, which must now run its course until the end of time.

So where on earth is God? Or has humanity been abandoned to its own fate? God has not abandoned the human race but is unable to be realised as a mass solution; only to the individual who, in truth, is the one and only appearing as the many. God or the Spirit never enters the world, yet is implicit within each being as the power and glory from which everything in existence arises and returns at death in the summation of the living life. But must we really wait for death to come to life, or is it possible to reconcile the appalling conditions of poverty and suffering that afflict so many in the world today?

The unifying principle between the invisible realm and the sensory world is love. But in these deeply material times love is mostly objectified as the love of someone or something and seldom realised as the direct experience of the originating source within the body. God is love and can only be realised through he or she who is willing to stand alone, not in defiance to the world at large but in denial of the right to defend and uphold the emotional negativity of the personal self, which is the death of love on earth. This is true responsibility for the state of being a man or woman no longer in revolt to God – and the destiny of each one of us, however long it takes.